While working on the new gear database – especially on the pages about the different MK Signature Strats – I felt it difficult to tell from a picture which of his different signature Strats it is  (Mark used alone three of these on the 2008 tour, and generally seems to use even more here and there). So I had to dig a bit deeper into the numerous pictures and viceo clips to find any hints how to distinguish between these. What was finally most helpful was Guy Fletcher’s video interview with Glenn Saggers, Mark’s guitar technician, in which we see the three MK sig Strats one next to the other.

Generally, they almost look the same, although e.g. one of them – which was borrowed from Mark’s bass player Glen Worf – has a different, lighter colour – but even this is almost impossible to see with all the lights on  stage pictures. One thing that is abit different on all Strats is the exact position of the Fender decal as this water slide decal is placed by hand on the headstock, and the position might vary up to half an inch or so. Similarly, the position of the string butterfly that holds down the e and b strings, and the position of the Mark Knopfler signature decal vary to some extent. With the help of these positions you can clearly tell from a (good!) picture which guitar you see. Take a look at the following pictures demonstrate  what I mean. 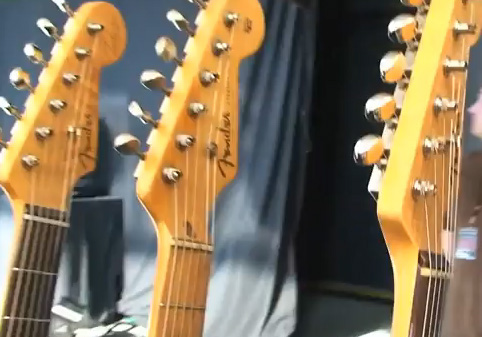 Mark Knopfler Signature Strat SE00001 (left) - Note how close together the string holder and the "d" of "Fender" are, the "d" is roughly in the middle between the a and d string tuners.