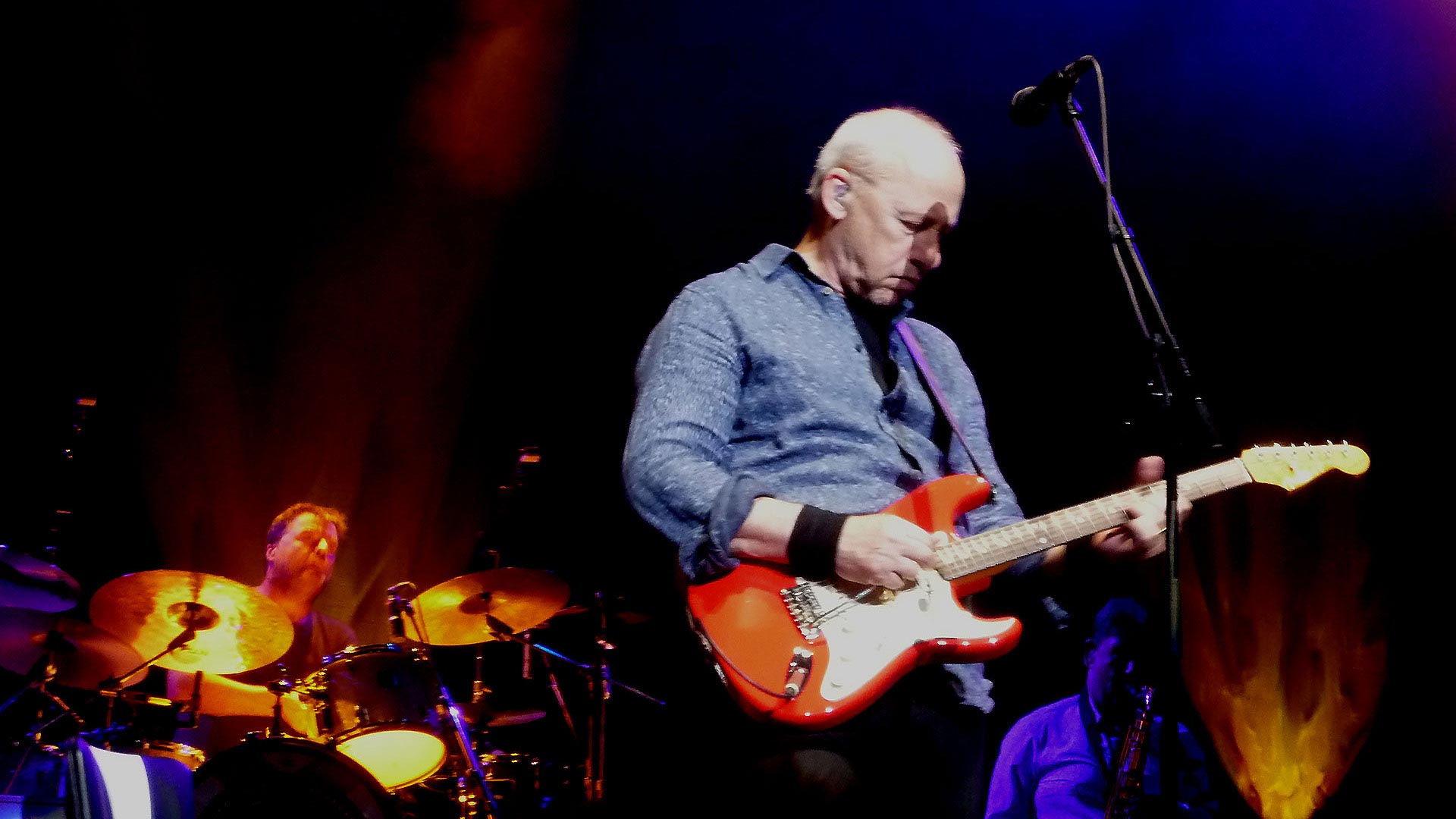 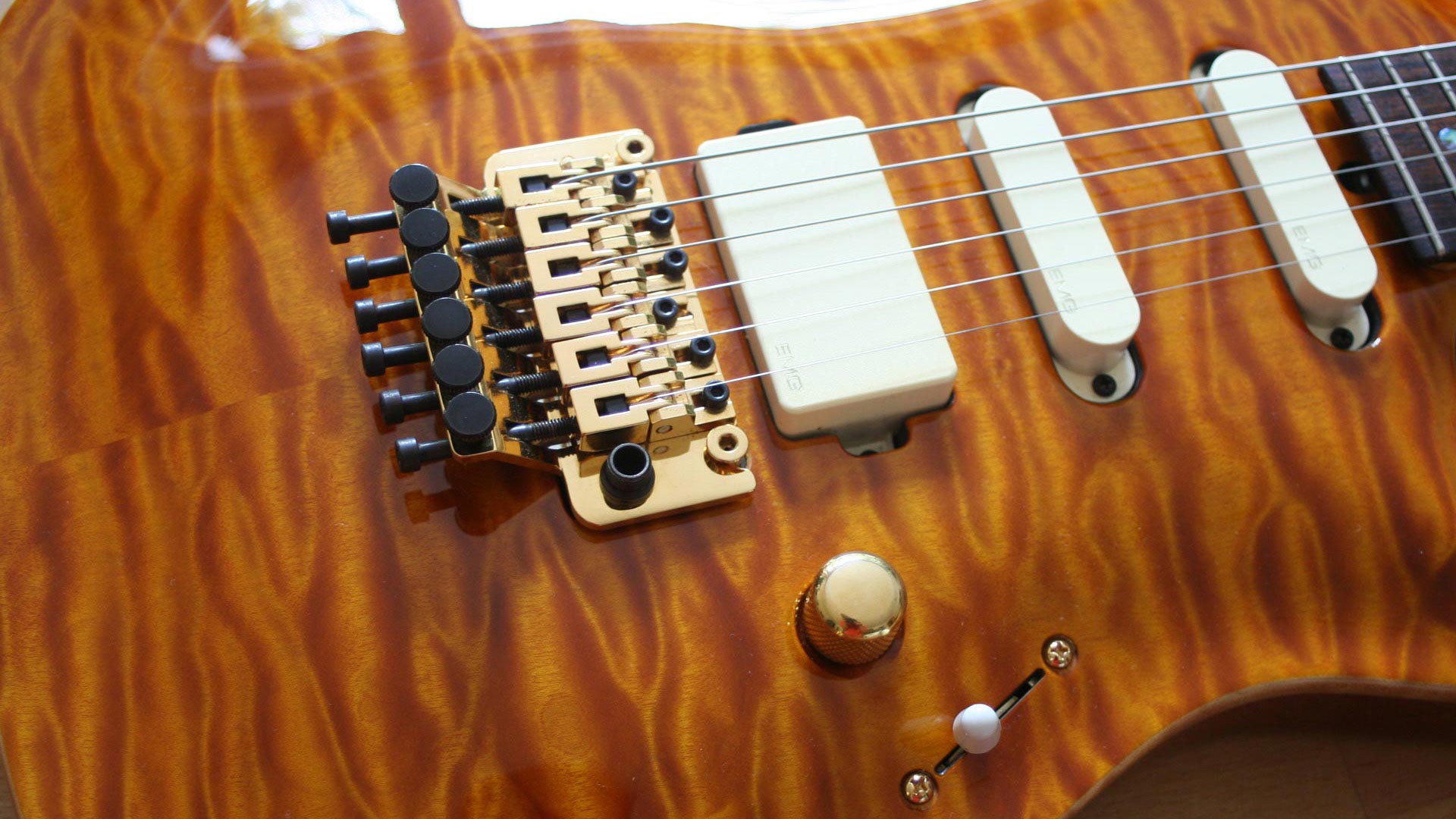 With this blog post I want to feature a website that hosts one of the most astonishing guitar collections in the world: Guitar Motel – guitarmotel.net

It is not only a collection with many great vintage guitars like Fenders or Gibsons but also with exactly those guitars that are ‘the ones’ for us Knopfler fans – like Van-Nuys era Schecters (I guess the biggest collection of these in the world), or Pensa Suhrs (plus many Pensas and many Suhrs). This is as the collectors who run this site are big MK fans themselves. 🙂
For a start, you might see the ‘Showroom’, then select a manufacturer from the drop-down list.

And here are two absolute highlights for us Knopfler fans:

And finally … the MK S8001 sunburst Alchemy Schecter. Check out the album with unseen pictures of this guitar:

Here are two videos from the official Bob Dylan Youtube channel, posted some months ago already. It is only a mimic session for a promotional video but it is from the original recording session at the New York Power station recording studio in  April/May 1983. And it features an alternate mix of the two songs, plus various other differences from the released album version, like different vocal takes.

For ‘gear-investigators’ like us, the shooting from the recording session reveals a lot of interesting details. Mark plays his red Schecter, more of Mark’s guitars can be seen standing behind him: the sunburst S8001 Schecter, the blue Fernandes, the Gibson Chet Atkins electric-classical, and a red Schecter with a red headstock, a rosewood fingerboard, and golden (I think) hardware that was never seen before, or after. On about 3:00 in the video of ‘Don’t fall apart on me tonight’ you can also see the 212 Music Man amp Mark used a lot in those days.

There are guitar cases, gear, cables and stuff all over the place (who says rock stars cannot be messy too), let us know if you find more interesting stuff in the comments here.

Mark was the producer of the album but he was not present when the mixing was done, and when Dylan re-recorded some vocals, as Mark had to tour in Germany in May ’83. Mark said he was not that happy with the final mix, and that he has some rough mixes – I guess like these two – that were amazing, including two different versions (band version and Mark/Dylan accoustic version) of one of his favourite songs from the session, ‘Blind Willie McTell’.

Don’t miss my latest video on Youtube. Here I am playing and explaining some riffs with that typical thumb-and-fingers picking pattern. You’ve heard such riffs on Knopfler/Dire Straits songs like Two Young Lovers, Walk of Life, Next Time I’m in Town, Overnight Sensation (by Tine Turner), Industrial Disease, Poor Boy’s Blues, and countless others.

I decided to release a video of a song that I recorded 20 years ago. It is less Knopfler-stylish than the guitar videos I normally post here but more in the mood of some Pink Floyd tunes. However, the long outro guitar solo on a Les Paul is of course inspired by Mark’s playing style and technique.

Making the video which is based mostly on a slide show was much fun for me. I hope you will enjoy the result.

Before you ask for the gear: For the last solo I used a 1974 Les Paul Custom through a Fender Princeton tweed amp clone that I built from scratch myself about 30 years ago. No effects besides the usual stuff in the recording software (reverb, delay, compression). Everything was recorded with a system called tripleDAT by CreamWare. I was working for this company back then when I recorded the song.

I made another video some weeks ago where I talked about doubling guitar riffs for a fatter sound. I played a Japanese Erlewine Automatic, a very cool guitar with one humbucker, and dialed in a sound similar to the Dire Straits classic Money for Nothing. I did not try to get as close as possible to the original sound which is very much a typical 80ies sound, bright with some phase cancellation effect. I rather wanted the sound a bit more natural and softer.

This week I recorded some Money for Nothing riffs with this sound, again with two doubled guitar tracks. The video focusses on the guitar riffs and sound so I only programmed some unintrusive drums, and some occasional bass notes but no keyboards, no permanent drum beats, no fancy stuff.

The gear, effects (Hotcake distortion pedal and software effects), and doubling technique are identical to the ones explained in detail in my video about doubling riffs.

In the early 80ies – in the Love over Gold / Local Hero / Infidels era – Mark Knopfler used a metallic blue Japanese Fernandes Strat copy with Seymour Duncan pickups in the studio. John Suhr once told me that in his opinion Mark created some of his best guitar sounds of that time with this guitar.

If you wonder what happened to this guitar or where it is today, the following videos will tell.

Here are two videos I recorded to try out another guitar I am building on: a Schecter Dream Machine-like Strat with an ash body and a birdseye-maple neck, with a brass tremolo and a ‘Making Movies’ pickguard. In other words, a Strat inspired by Mark Knopfler’s S8001 Schecter Strat.

It is not finished but assembled for tests of sound, playability, and stability. And I must say, I am very impressed by the warm and clear sound of it. I think it is a winner,  and the body / neck combination will remain (if I didn’t like the sound I would try the neck on another body, until I find something I like).

The guitar was recorded directly in a digital Soundcraft UI24R mixing desk. The amp emulation was from this device, and so are the effects which are EQ, compressor, reverb, and delay.

The music is inspired by an instrumental part that Dire Straits added into Tunnel of Love on stage on the Brothers in Arm and On Every Street tours when they introduced all the band members. The instruments are all virtual VST instruments by Native Instruments, recorded into Cubase.

Here is another video, Six Blade Knife. I switched the pickup mini switches to the tapped coil now, in the video before they were switched to full coil (see what is a tapped pickup).

Let me know what you think of the sound of the guitar – comment here (no registration required) or on Youtube.

Here is a video I made to demonstrate the use and the different sound effect of different ‘doubling techniques’. Doubling is nothing too fancy or secret but a common studio recording technique. Still it might be interesting not only for beginners as each of the different approaches leads to different results which are compared in ths video.

To judge the stereo effect it is best to listen to the sounds with headphones!

The guitar sound I dialed in is a bit similar to the Dire Straits classic Money for Nothing. On this song all three of these doubling techniques were actually used I think. The intro was doubled with about 15 ms delay. Note that this delay can be achieved with a delay effect, or with two microphones, one close to the amp and the other some meters away (15 ms delay equals about 5 meters distance). I guess Mark used a delay as with a 2nd microphone at such a distance the sound of that signal will be a bit different due to the higher amount of room sound. Later in the song a second guitar comes in, both being panned to the different stereo channels.

The guitar I am playing here is an Erlewine Automatic from 1983. It is similar to the one that Mark Knopfler played on e.g. Industrial Disease, however this is a cheaper edition that Erlewine had produced to his specifications in Japan. Most of these have only one pot, no tone pot like this one has.

The trick for this sound was rolling back the tone pot completely. Something a reliable source once told me Mark also did for Money for Nothing, the Wah to boost midrange was something he did later I think.

The Hot Cake distortion effect sounds really nice for this sound. Mark uses it as well, however there is no reliable information when he used it for which tracks.

In my last two videos I got some nice guitar sounds out of the integrated amp simulation and effects of my Soundcraft UI24R mixing desk. I was playing the MK61 pickups in the bridge & middle position of my Strat. This week I tried the same with the neck pickup. This is a VFS-1 pickup.

I also worked much more with my ‘virtual studio’ (Steinberg Cubase together with the Soundcraft mixer) lately where I made a setup with various VST instruments that can easily be used to create backing tracks of different styles and chords within a very short time. I put in some chords and sounds of a groove that fits to the guitar sound I had in mind.

I was jamming along for several minutes and filmed a few takes. For the finished video I wanted to cut it down to 2 minutes or so but I could not decide which parts to ‘throw away’ so I left it as it was.

All the gear, all effects and all settings are shown as screenshots in the video in case you wonder how this guitar sound was created. Just like in the last videos, the key was to use a rather bright setup and to roll back both the volume and tone pots to make the sound softer and less harsh.

This week again I recorded some guitar sounds over a backing track produced for this purpose. After Once Upon a Time in the West in my last video, this time it is the next song on the same album: News.

The guitar sound on the whole Communiqué album is very special to me because it was this one – together with the first album – that turned me to Dire Straits when I was thirteen, and made me start playing guitar.

I could never get really close to this sound in previous attempts but meanwhile I am getting better I think, so I am quite happy with the result. I did not use gear as close as possible to the original stuff that Mark used on the album, in fact I did not use an amp at all, no Morley volume pedal, no fancy other devices but only a digital amp emulation and effects of my digital Soundcraft UI24R mixing desk.

I dialed in a rather trebly sound, and I did two things to make it softer: I turned down the volume pot to 8 to reduce some of the harshness of a normal Fender Strat pickup (the effect is similar to what Mark’s Morley volume pedal did to the sound), and I rolled back the tone pot. For the fingerpicking guitar  to ‘7’, and to ‘3’ for the solo. The tone cap in my guitar is a bit smaller than in vintage Strats, I think it is 0.033 uF instead of the 0.1 uF (I admit I need to check to be certain as I am pulling stuff in and out too often…).

I had the 5-way switch to the 1&2 position. The guitar is one of my two part-o-casters, with two MK61 pickups and a VFS-1 pickup in the neck position. The effects and settings were similar to the ones I described in the post for my previous video.

I recorded the backing track in Cubase. Both the drums and the bass were programmed to feed VST instruments, and I recorded three guitar tracks, the picking part, the lead, and the ‘chick’-sound rhythm guitar on the right stereo channel (this guitar is my self-built bubinga body dream machine Strat).