Info: This was the guitar that replaced Mark’s two red Fender Strats as his main axe in 1980. He bought it together with some more Schecters (another red one, a blue and a sunburst Strat, and a black Telecaster) at Rudy Music Stop in New York. Schecter had been a manufacturer of quality parts to upgrade mainly Fender guitars but had recently started to offer completely assembled guitars which were called Dream Machines. Most of the hardware was made of brass instead of steel, and the woods were normally exotic or high-quality woods. The body of this guitar is mahogany, the base wood for a Gibson Les Paul body, and the neck is a high-grade figured birds-eye maple neck. Due to the brass hardware and the choice of woods, this guitar might be relatively heavy. Tom Anderson, who worked for Schecter at that period, remembered that it sounded very dark so that they were afraid Mark would not like it.

The reason why Mark changed from Fender to Schecter was mainly because he was looking for a reliable guitar that was easier to play than his Fenders, and his then-girlfriend had a Schecter which impressed him very much.

Schecter Dream Machines were equipped with Schecter F500T pickups and had three mini toggle switches. As each pickup had two sounds due to a tapped coil, the switches enabled 26 different sound combinations. He recorded Making Movies and started the On Location tour with these pickups, but after the Christmas break he put Seymour Duncans into this guitar. At the time of the Brothers in Arms tour (1985/86) he had Seymour Duncans APS-1 in the guitar, it is not sure if these were the same Seymour Duncans he had in 1981 or not (I think the APS-1 were released later and Seymour Duncan had only SSL 1-6 in the early 80ies, out of these Knopfler’s pickups should be SSL-1).

After he  got his first Pensa Suhrs in 1987/88, he used the red Schecter only for some songs, e.g. One Every Street or for the encore Wild Theme / Local Hero. 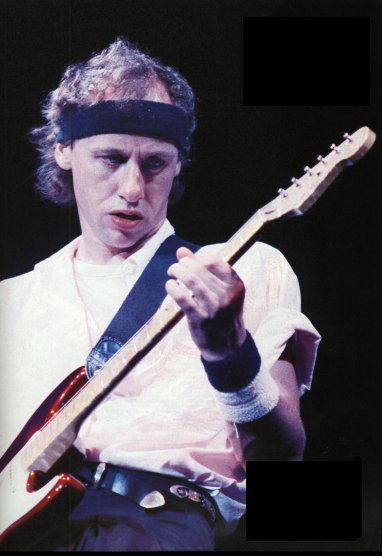