Quarter note triplets are notes of a certain duration, or in other words they produce a certain rhythimcal effect. Such a note is shorter than a quarter note but longer than an eighth note. They do not “fit” into the normal grid of half, quarter, eighth or sixteenth notes; they break out of the normal rhythm scheme, thus highlighting a melody or a phrase.

However, they have nothing to do with a “free timing”, they follow a precise logic and have a certain length and rhythm.

With the help of licks based on these quarter note triplets you will increase your vocabulary on the guitar. Whenever you are in danger of running out of ideas or feel chained to a standard rhythm, even a very short lick of quarter note triplets will break up your normal rhythm and give a distinctive gleam to your solo.

Examples of these licks can be found in a great number of Mark Knopfler / Dire Straits tunes, surely to many to name them all (it is probably easier to name those who do not feature them) . Some nice examples which are mentioned later in this article are:

Sultans of Swing, Down to the Waterline,  Lions, Tunnel of Love, Single Handed Sailor, Private Dancer, I believe in you (Bob Dylan featuring Mark Knopfler)

How do quarter note triplets work?

To start with, let`s have a look at the basics of note duration. A standard (= 4/4) bar consists of four beats of the same length (counting: one – two – three – four). This duration – as long as one beat – is called a quarter note.

A note that lasts as long as one bar is called a whole note, and the one that is one half of this length is a half note, of course.

If you combine notes with different duration, you will get a particular rhythm, just like in the following example. 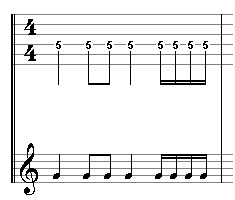 Note that all these notes are a multiple of the shortest appearing note length. In the previous example this shortest length is a sixteenth note. If you imagine the bar being divided into sixteen beats of this length, you will get a sixteenth note grid (grey notes). All other notes of this example perfectly fit into this grid, which means they all start on a grid position, while other grid positions are simply left free. The next picture shows the previous example, now over such a grid.

The first of the three quarter note triplets falls together with the eighth note, but the next two “sit somewhere between” the grid lines (no matter if you have an eighth or sixteenth note grid). This is the reason why quarter note triplets are more difficult to play, but also why they cause a feeling of breaking out of the normal rhtythm scheme – they simply do.

If you want to play quarter note triplets, you should be aware of the following two rules:

After so much theoretical background, now is probably the right time for some concrete examples so that you have something “in your ear”.

Our first lick appears in the intro of Sultans of Swing (0:09). Here the quarter note triplet consists of three notes on the high E-string (an A, C and A again).

A second example lick is from the middle part of Down to the Waterline (2:45).

Note that it is rhythmically identical to the example before. The quarter note triplet again starts on the third beat of the bar.

As you probably see, the only difficult aspect about quarter note triplets is the right timing – regular but not on or directly between the beats like “normal” notes.

You should start to practise the rhythmical aspect first, so forget about note names and simply play a muted string over a metronome counting the beats (= playing quarter notes).

In other words, don`t try to play the second and third note at their correct position (this is very difficult because the metronome does not help you), but instead try to start and to end on a beat with a constant speed  (start: “three” of bar one, end: “one” of bar two)

The fourth beat of the metronome – “the “four” – falls between the second and the third of those triplet notes. Try not to be confused by this.

Mind to play it regularly, all three notes of the triplet have the same length. If the last note (the one on beat “one”) starts too early, try to play the triplet slower. If it comes too late, play the triple slightly faster.

· You should practise this with a metronome (or a drum track).
· Practise at different speeds (be aware that a slower speed might be more difficult than a high speed).
· Practise thorougly, it is the precision that make it sound good.
· Finally you should develop a feeling for quarter note triplets and play them without thinking too much about what are are just reading.

Note: You should practise the rhythm first (previous exercise) and only start with this next step if you perfectly manage the previous exercise. As you probably will not really listen to this advice, you should try to do the exercise later again, until you can play all notes precisely.

Basically you can play any notes that you would normally play. However, often it sounds good to start and to end with a note that belongs to the respective chord. Note that this is the case with the two Knopfler licks discussed so far.

The following examples include quarter note triplets over a C chord, so the first and the fourth notes are notes of a C chord.

The next examples run over a chord change from C to G.

The next example can be found in Six Blade Knife (start of the first solo) on many live versions (on the studio version he plays eighth notes):

â€¦ or another one from Down to the Waterline which opens the solos:

Here is another example in which two quarter note triplets (6 notes) fill up a complete bar (from Bob Dylan –  Slow Train Coming/ I believe in You, 4:33) . Note how you can “pinch” the strings to create an effect similar to staccato. 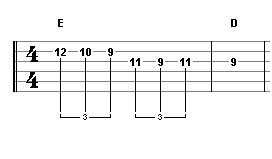 The following example can be be found in some early live versions of Water of Love. Note how a two-string scale lick makes use of quarter note triplets.

The following is a mistake that is typical when learning quarter note triplets. If you try to make the notes match to a grid of eighth notes, you might play something like in the second bar of the following example. In this bar, the second note is too early and the third too late. The rule “all have the same length” is violated. Compare the “wrong” version of the second bar with the correct one of the first bar.

One thing you can do to make these quarter note triplets even more interesting is to leave out some of the notes. You should “think” the left out notes (to keep a steady feel when playing) but not actually play them. The following example shows two ways to leave out a note (first bar: the third note, second bar: the second note):

In the following example – similar to the the first solo of Sultans of Swing, 3:27 – the first note of a quarter note triplet is left out.

Examples from other artists

Of course quarter note triplets are something that is not limited to the electric guitar. You can find them in all kind of music, among all instruments, or in vocal parts.

Or the Mark Knopfler song Private Dancer from Tina Turner: I’m your private dancer, a (now the triplet) dan-cer-for-money…

You have learned that quarter note triplets do not fit into a straight grid of smaller note length. For this reason they are more difficult to play but reward you with a nice rhythmical effect. They are useful to set highlights to your solo.

They should be aware of their nature and practise them until you have internalized them and can play them without thinking about.

Often they start at the first or third beat of a bar. Likewise, you can play them one after the other, filling up a bar with 6 notes of the same length.

Interesting effects are created when some of these notes are simply left out.

Why not use the comment function to add more examples of quarter note triplets and discuss these here?