Mark Knopfler got his first Strat only shortly before Dire Straits were formed. Before that time he had played a Gibson Les Paul Special through a Selmer tube combo amp in a band called The Cafe Racers. It is not clear if he owned the Selmer amp or if it was borrowed. What we know is that when he got the Strat, he plugged it into a Fender Vibrolux which probably belonged to Dire Straits’ bass player John Illsley. Today however, it is still in Knopfler’s possession.

This amp was a Fender Vibrolux from the early 60ies  – from the brown-tolex era. Internally Fender called this model 6G11 (first revision), or 6G11-A (second revision, the more common version to be found).

The brown Vibrolux is a really wonderful amp: with about 30 watts from two 6L6 tubes it has enough power to be played in a band with drums and bass, yet it is  small and light. It has one 12″ speaker (an Oxford 12L6 or 12M6)  and a tremolo effects. Unfortunately it has no reverb (a feature Fender introduced with the later black face series, the only brown amp with reverb was the 2 x 10″ Vibroverb from about 1963), with reverb the Vibrolux might have been the ultimate small combo amp. The rectifier is also a tube.

The controls are pretty much standard: One channel with Volume, Treble, Bass, the second channel with Volume, Treble, Bass, and two tremolo controls (Speed, Intensity) which affect both channels. There are no bright switches – another feature introduced with the black face amps. However, the second channel is called “Bright” as a small condenser across the volume poti adds some treble – the same circuit as a bright switch, just not switchable.

The Vibrolux does not have a Fender logo on the front grill cloth – the one on Knopfler’s amp is not original.

Knopfler played this amp live in 1977 and early 1978. There is only a limited number of live pictures  from 1977, and most do not show any amps.  We have the following sources from this period that mention the Vibrolux:

a) Knopfler himself said in a an interview that Sultans of Swing was first written in open tuning on a National steel guitar, but it was totally changed when he got his Strat and played it through the Vibrolux.

b) There are two pictures from an early live gig at the bandstand on Clapham Common, London, September , 1977 (two months after recording the demo of Sultans of Swing, five months before the recording of the first album in February 1978)

e) A personal interview with Chas Herington who was the engineer on both the demo and the single version of Sultans of Swing (both recorded at Pathway studio, July 1977 and April 1978, the song was re-recorded two months after the recording of the first album because the record company wanted more of a rock sound for the single). He also told me that it was mic’ed with a Neumann mic.

There is no evidence that this amp was played on the Sultans of Swing version of Dire Straits’ first album (recorded in February 1978). Possibly different amps were used here (Twin Reverb, Jazz Chorus, and the Vibrolux). In about May 1978 Knopfler started to play Fender Twin Reverbs on stage. The Vibrolux reapperad with the Notting Hillbillies and is still frequently used these days in Knopfler’s British Grove studio.

I know that Knopfler’s amp does not have the original Oxford speaker anymore. I talked with Knopfler’s guitar tech Glenn Saggers about this amp some years ago on on a Notting Hillbillies gig, and he told me it had a Celestion speaker. Unfortunately he did not remember which model (they can sound very different) so I gave Glenn a self-addressed postcard and asked him if he might send it to me after checking the amp the next time. I did not really expect he would remember it, or find the time, but some months later I in fact  got a card with the answer: a Sound City speaker  -these were often produced by Fane (Thank you Glenn if you ever read this 🙂 )

Here are some detail pictures of a 1961 Vibrolux: 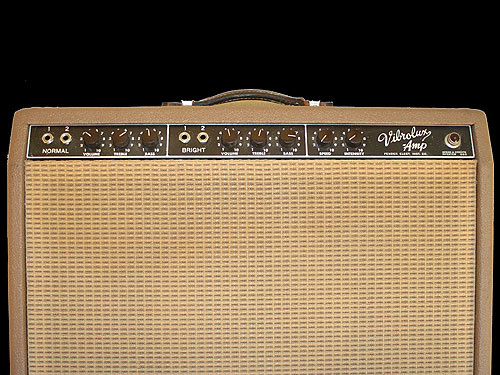