With this blog post I will try to compile some info on Mark Knopfler’s effect rack for his latest tours – based mainly on pictures of his 2008 tour. Probably the same rack was also used on his latest 2010 tour.

Here we have a picture of the full rack: 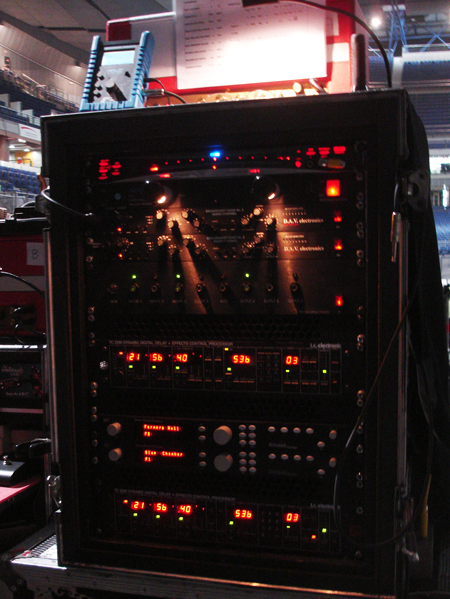 Preamps – Below the tuner there seem to two units with various preamps by D.A.V electronics. These are used to raise the guitar signal to the correct level that is required to feed the various studio effect devices we can see a bit below.

Switching – The next unit seems to feature individual switches for the various effect feeds. The control on the left is a gain control, followed by various push buttons, each witch a green pilot light. I guess here Mark’s guitar technician Glenn Saggers mutes or activates the different aux effects.

Delay – Next comes a TC Electronis 2290 Dynamic Delay –  a state-of-the-art digital delay. Note that Mark has two of these, the other one being the last device (bottom).

Reverb – Next we see two Bricasti M7 reverb units. Bricasti is a relatively new company founded by some ex-Lexicon employees. One of these costs about 3.700 Euros ! Note that these were not used at all because it was prefered to put a reverb on the guitar sound on the mixing desk. 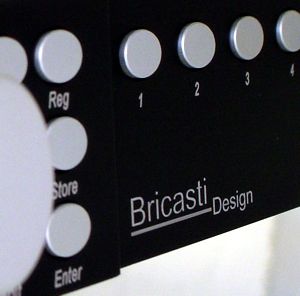 It will hardly be a surprise that the rack features only components of the highest available quality. While the previous racks built by Pete Cornish featured Cornish’s own signal preamps and buffers, now these are by D.A.V. (Dave Electronis) – a company that also supplied Knopfler’s  British Grove recording studios. Possibly the switching unit was also supplied by them (?). We can assume that the overall logic behind the rack – sending effect feeds in parallel just like studio mixing desks do – is still valid for this rack.