As promised in the comments on one of the last articles, I tried to find all pictures of one of Dire Straits’ first gigs – the one at the summer party for Charlie Gilett’s Honky Tonk Radio Show, on the Clapham Common bandstand, September 10, 1977. Unfortunately there are only 4 pictures it seems, not 5 or 6 as I hoped (the one on the sleeve of the Honky Tonk Demos compilation turned out  to be the same as the one in Michael Oldfield’s book about Dire Straits).

First the two pictures from the Vibrolux article again: 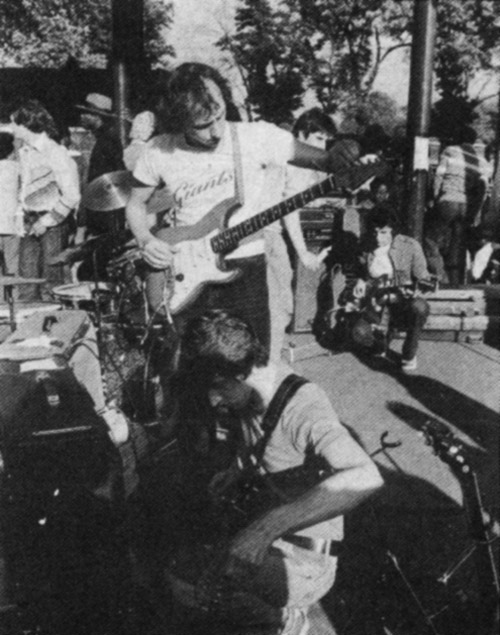 Knopfler is tuning his # 68354 Strat here (the ’61 with rosewood fingerboard), plugged into the brown Vibrolux. You cannot really see what the amp next to it is, but my guess is a blackface Fender Concert Amp, the same you can see in this article of this blog. I suspect it was borrowed from Mark’s Notting Hillbilly friend Brendan Croker. On the right side you can see the neck of another guitar: Mark’s ’59 Gibson Les Paul Special. The bass amp seems to be a …, well, a weird amp ;). 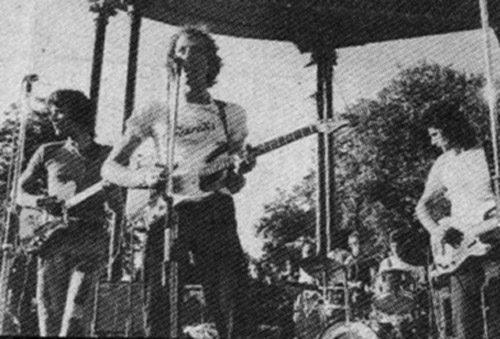 John Illsley already has his Precision bass, and David seems to play the black Telecaster Thinline that Mark plays on Water of Love in later concerts. Both the picture above and this let us assume that David plays the Tele through the Concert amp, but theoretically it is possible that Mark plays through both of these amps (just like in the Roundhouse, January 29, 1978), and that David plays through an amp outside the picture, e.g. on the left side of these amps. There is absolutely no evidence for it, just a vague feeling …

The following picture is the one from the Michael Oldfield book. Meanwhile it  turned out that it is cropped  in the English version of the book,  while the French version includes a full-size version of the same pic (Thank you for sending me the pic, Jean-Francois) . The difference is just some mere 15 %  at the right side, but these 15 % just show an essential detail: the backside of the Strat.

Unfortunately you cannot really find any new information about the early Dire Straits Strat here, the resolution of this black/white picture pretends us from seeing any interesting details. I am almost sure that this is the same Strat as in the pictures above (the # 68354, which probably still was bare wood finish here), and that Mark plays the Les Paul Special. A lot of cables on the floor, why not some effect device never seen before which would finally tell us why Mark’s guitar sounded so beefy, warm and fat on some of these old recordings? Well, dream on…

… and here the fourth picture: 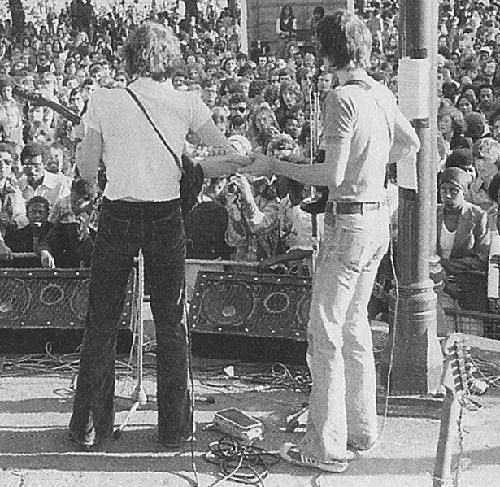 I can imagine that it is taken just some seconds before or after the one before, so I think he plays that Gibson on both pictures. Note that pedal: a colorsound. This can be a volume pedal, but more likely it is a wah or rather wah/volume (most of the colorsounds you find are this combination). They came in different colors, like yellow, blue, silver, purple, etc. It is a bit noisy but sounds really fine otherwise, it has its own character, like most good wahs have. I even  remember reading somewhere that Mark used a wah on this or the very first gig they did on a lawn before their house in Deptford, London.

Some other bands that played on this summer party gig were the Darts and Rico. In the evening of the same day Dire Straits played in the Hope & Anchor pub in Islington.

The photographer of all these pics is Andra Nelki.