From 1980 on, Mark’s guitar effects were mainly integrated into huge rack systems. At the time of Dire Straits, these were designed and built by Pete Cornish, specialist on high-quality racks and effects for numerous big names like Mark Knopfler, Eric  Clapton, David Gilmour, Lor Reed, …

Pictures of Mark’s racks however are extremely rare, mainly because the rack was often located behind the stage, and at least partly operated by Mark’s guitar technician from there.

Recently Pete Cornish published some unseen pictures of two of Mark’s racks on his Facebook page. One of them shows the rack of the Love over Gold tour (I will cover the other rack in a coming blog post). In fact it is the first time we see this rack at all I think.

In the following, I will try to explain as many details I can make sense of. If you think you can add something, use the comment function at the bottom of thispost (no registration required).  So, first of all here is the picture itself.

The Cornish racks follow the same logic that is true for effects used in the studio: most effects sit in a dedicated aux way (send / return), thus the path of the direct guitar signal is kept short and simple. (Note that however, not all effects can be used as aux effects but only those who “add” some effect to the dry signal. Effects that also might “reduce” something of the direct signal must sit in the direct path, e.g. compressor/limiter, EQ, distortion,..)

Cornish uses buffers on many locations within his racks. These can colour the sound is an intended way. The foot remote control is a wooden case of heavy-duty waterproof multiplex wood, all switches are normally military-grade quality products. 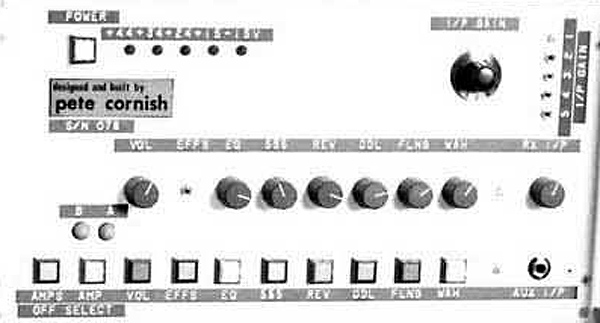 On top left, we can see the power indicator / power button. I think that those square button-like elements are push switches that glow in different colours when switched on. I am not sure of the five elements we see next to the power button, I cannot read the description properly … does it end with … 15 – 15 V? So we possibly have indicator LEDs here that might show the presence of different voltages to run the rack, or the input or output level of the signal.

On the top right, we have what looks like a rotatory switch labelled with something like “1/P Gain” (or I / P ?). The same description can be found a bit more on the right where other five elements are located, labelled with numbers 1 to 5. I guess the rotary switch has five positions, and the selected one is indicated with an LED. It might be the gain of the first input stage, this would make technically most sense to me. On the other hand,  the “P” makes me think of “parallel” so it might also be about gain of the send/return paths. This might go together with the two elements right below this section, which seem to be a control and a jack labelled with “?X 1 / P” and “AUX 1/P”

The serial number of the rack is 078.

Next we have a line with 8 controls and many of those square switches that partly correspond with the controls. The controls seem to read “VOL” , “EQ” “555” (= Roland Space Echo 555), “REV” (Reverb), “DDL” (I guess Deltalab Delay or digital delay) “FLND” (Flanger DynaFlanger”, and “Wah” (well, Mark used a wah for at least It never rains on that tour).

I suspect these controls to be rather return levels (and thus controlling the actual effect depth of the corresponding effects).  The corresponding switches might mute or enable the respective effect path (alternatively, these can be switched with the foot remote control).

Between the VOL and EQ controls, we have a “EFFS” switch, I guess it is a master switch to enable or bypass all effects.

One of the two buttons on the left seems to be an “AMP SELECT”, with two LEDs for amp A and amp B, and the other one is “AMPS OFF” and will mute the signal to the amps.

I am not sure if VOL is simply a master volume control, or if it has to do with the volume pedal. Also is is unusual to have a path for the wah as normally a wah is not used in an aux way.

Below we see the different rack effects. These are partly identical to the ones used on the previous On Location (Making Movies) tour. A description of these effects can be found in the blog post about that effect rack.

With the foot remote control unit, Mark could  enable or bypass the different effects.

We see 15 foot switches. Each one seems to have a corresponding status LED (although we cannot see these for the upper line of switches).

The one second to the last has two LEDs. It looks like the A/B amp select, and I guess the last one is “(All) Amps off”.

I cannot tell if any effect programs (e.g. from the Deltalab delay) could be selected from here as well.

As said, feel free to add your suspects or thoughts on any elements with the help of the comments.