This blog post is not about a Mark Knopfler amp but still has a clear connection to Dire Straits: the Peavey Deuce VT was the amp that David Knopfler played on stage with the band between 1978 and 1979, and thus contributed to the band’s unique sound.

The Peavey Deuce VT was built from 1978 to the early eighties. Before, a similar model called Deuce (without the VT) was available that had – besides various other technical differences – a tremolo effect instead of the phaser.  As a combo with two 12″ speakers, it has similar dimensions as the Fender Twin Reverb or the Music Man HD 130 212 that Mark played at the same time. In fact David started to play the Peavey at the same time as the Music Man appeared for the first time, in late 1978. Before (mid 1978) both Mark and David were seen with Fender Twin Reverbs on stage. I assume both were bought together when they felt they needed to upgrade their equipment for the following tours. 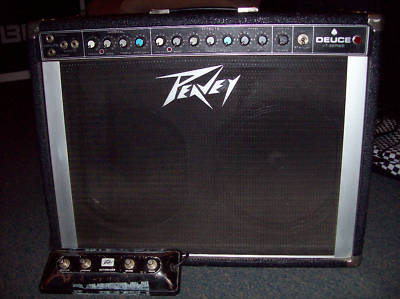 The Peavey Deuce is – just like the Music Man – a hybrid amp which means the pre-amp stage is solid state, while the power amp has four 6L6 tubes. Today solid-state is considered to be inferior because of the harsher distortion compared to a tube, but back then it was almost high-tech, considered to be more reliable than an all tube design – no crackling noises, no whistling pre-amp tubes, less danger for a failing tube in the middle of a performance. The amp is bulit like a tank, solid and heavy, suited for professional usage on big stages.

While Mark’s Music Man is basically an upgraded Fender Twin Reverb, with the same controls, the Peavey Deuce VT has its own layout: two channels (Effects and Normal) , built in reverb (works on both channels) and the phaser effect (effects channel only). On the left we find four input  jacks, two for the effects channel, one for the normal channel, and one to use both channels (together or switchable with a foot switch).

The Normal channel has a control for pre gain (gain before the EQ section), bass, treble,  and post gain (after the EQ section), the Effects channel has controls for pre gain,bass, middle, treble, post gain, and color and rate for the phaser. The phaser of the Deuce VT is said to be really good sounding. The phaser we hear live on the songs Down to the Waterline or Once Upon a Time in the West might be from the Deuce, but some sources also claim that a MXR stomp box was used for this matter. However, many pictures from this time seem to prove that David’s guitar cable went directly into the Peavey,  so live it should come from the Deuce.

Finally we have  a Master section on the amp that has only one control for the reverb which affected both channels. 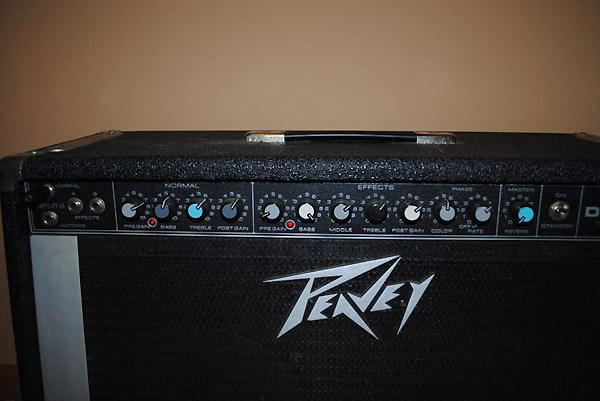 The amp was optionally available with heavy-duty speakers called Black Widow. These are much heavier, more solid and can handle more power  than the stock speakers. I know from David himself that his amp had  these.