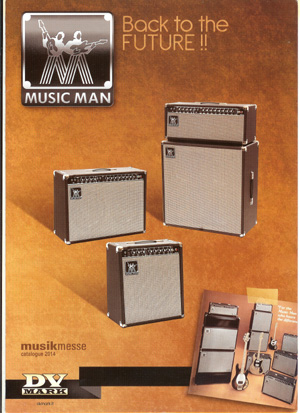 What a nice surprise on this year’s Frankfurt Music Fair:  Music Man amps are coming back.  DV MARK (dvmark.it) displayed reissues of those  silver-black Music Man amps that were popular in the seventies and eighties.

DV MARK presented reissues of three popular amp models and one speaker cabinet: the HD 130 Reverb top (the model Eric Clapton played) with a 4 x 12″ cabinet, the 112 RD 50 (a very popular small combo with an additional tube for the overdrive), and of course the “Mark Knopfler model” 212 HD 130.

Here are some first impressions on the 212 HD 130 combo: The reissue looks similar but not identical to the original. They all have of course the black tolex cover and the silver front grill, also the familiar Music Man logo on the front. The logo is the inverted “silver on black” version of the late Music Man amps (after 1980) instead of the original “black on silver” logo on Mark’s amps. It is also a bit smaller.

All controls were identical but some of the cosmetics were a bit different, e.g. the shape of the bright switches. Unfortunately the reissue is not the version with the tube driver (all Music Man amps had a solid-state pre amp and a tube power amp section, but the amps before 1978 had a tube in the driver stage that sits between pre and power amp). I am not sure if Mark had the version with the tube or not – the change was in 1978, about the time when Mark got his first Music Man amp so both is possible but generally the ones with the tube are regarded as better sounding.

Another difference became obvious when I wanted to play the amp. Just like the original it has a power switch on the front (with  a high and low swtting for reduced output power), but when I reached for the back of the amp to switch on the standby switch I had to find out that there was no switch. I cannot tell if the amp I played was a prototype with non final specs, at least it had no standby switch at all. Judging on the sound is difficult as a music fair is not the ideal situation to check out an amp with all its tonal capabilities. At least it did not seem to sound completely different.

I learned that these amps are produced in Italy by DV Mark licenced by Ernie Ball who also still produce the Music Man basses and hold the right for the Music man label. The amps should be available in September 2014, I have no info yet on the price.

7 thoughts on “Music Man Amps are back”