Have you ever tried to transcribe a solo from a recording and you wished you could hear that guitar better in the mix than you actually did? Or did you ask yourself if there is chorus or not, or any other effects? Instead, the vocals, the bass, the drums, everything is louder than what you are trying to listen to, and for this reason you have no chance to hear what you want. Wouldn’t it be great to have a tool with which you can only hear that guitar alone, without the other instruments?

In fact this would be a dream for me, but such a thing does not exist, and despite all new technology maybe never will. But still there is something that sometimes does at least a bit of this and might help you to hear those things better – or at least to hear completely different – than you normally do: the Ingo Raven Super-miracle-transcriber-eliminator…

OK, let’s stop kidding, but in fact some years ago I accidentally came across something exactly like this: my headphones were damaged and for some reason I randomly heard everything completely different: some instruments totally disappeared, others were much louder, and I could hear guitar parts or notes that I didn’t really hear before. I examined what had happend and found a way to do exactly the same with any non-damaged headphones. What does this sound like. Well, listen for yourself:

I guess this should be similar to what some karaoke machines might do – but I have to admit I never really tried out one of these myself. Actually all signals that are exactly in the center of the stereo panorama are cancelled out – often just their reverb cloud remains because this is normally stereo -, while instruments that are rather on only the left or right stereo channel become much louder. 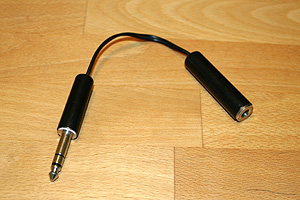 I tried to achieve the same with software plug-ins, I was sure that it should be posible, but the results I got so far did not convince me (however I admit I stopped after a few attempts). My tool is simply a headphone cable adaptor. Plug it into your stereo or mp3-player, your headphones into the adaptor, and you will hear it exactly like on the sound clip above.

If you want one of these, I can send you the adaptor for 9,95 € + postage (2€ within Europe, 4 € for the rest of the world). There is a version for large (1/4 ” /6,5 mm) or small (1/8 ” / 3.5 mm) phone jacks, or versions with mixed jacks (large to small or small to large jacks). Please email me at ingo(at)mk-guitar.com to tell me which version you want, and your address. I will send you a Paypal request then. If you don’t want to use Paypal we can try to find another solution.