The bootleg Dire Straits – Leeds – January 30 (31?), 1978 is one of the earliest Dire Straits live recordings (actually the only earlier live recording is  only one song – Eastbound Train from the Hope & Anchor pub, London, December 1977). This bootleg concert was recorded about one week before the recoding sessions for the very first Dire Straits album. This gig was the last of a short England tour, where Dire Straits played support for the Talking Heads. For this reason they did not play a full-length concert set.

The bootleg is from a soundboard recording on a tape cassette and contains the following songs: Southbound Again – Eastbound Train – Down to the Waterline – In the Gallery – Water of Love – Setting me up – Me and my friends – Real Girl – Sultans of Swing

Unfortunately the original tape  was damaged in the solo of the first song – Southbound Again – the reason why the last part of this song is missing. It continues with Eastbound Train (first seconds also missing), but we don’t know how long it took to fix the tape problem (or even to notice the problem) so we don’t know whether there have been any other songs in between or not.

There are no pictures or videos of this concert, but there are a few pictures around from the concert one day before, January 29, at the Roundhouse in London. These pictures are all black&white, but on some you can see a part of the backline gear, which has been very likely the same for all concerts on that tour. The best picture is the following, a rather small picture from a story in Q magazine from 1987. 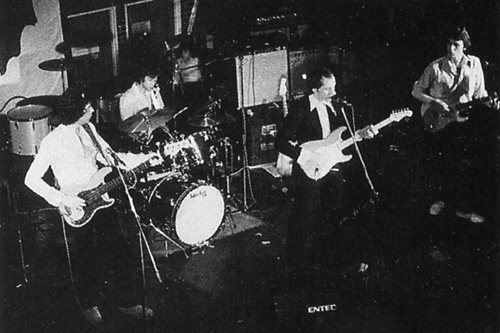 It is rather hard to see any details. What you can see are three amps. The one in the middle (behind Knopfler’s head) is the brown Fender Vibrolux (he still owns this amp and uses it in his British Grove studios). The square-shaped amp on the left of it is also a Fender, as it seems a black face, and according to the proportions a 4 x 10″ combo. I first suspected it to be a Super Reverb, but meanwhile think it is a Fender Concert Amp (no reverb). The amp on the right is a Music Man, and is probably played by Mark’s brother David. It is not the 212 Music Man that Knopfler used later this year because this would be higher than the Vibrolux. It must be a 2 x 10″ combo.

The guitar is Mark’s maple-neck Fender # 80470, with its white non-original pickguard (see this article for more information on the pickguard issue). The guitar behind Mark seems to be his rosewood Fender # 68354, I suspect it is still bare wood finish here, I assume it was painted red not before summer that year.

As it seems David plays his Fender Strat, the one that later was black, but here it is also still wood finish (possibly both were refinished at the same time). Unfortunately you cannot see any effects or other details.