I already wrote three articles about Japanese vintage Strats, an introduction and a portrait of the fiesta red and the pink metallic Squier JV. I noticed that a lot of people surf into this site because of these articles, so I want to release a fourth one, this time about the almost legendary Tokai Springy Sound Strats.

Many years ago I had on of these myself. This was about 1980. I was already a huge Dire Straits fan. Mark Knopfler was still associated with his red Fender Strats (although in fact he had just started to play Schecter that year). Red guitars were rare in the guitar shops – or rather non-existent. Fender had dropped fiesta red eleven years before, in 1969, and in fact I had never seen a fiesta red Strat at all until then. One day I visited the local guitar shop – something I did regularly, just to see and to play as many guitars as possible. And on this shelf there was this elegant looking fiesta red Tokai Stratocaster. But besides the cool colour, there was something else that was unique: it was a replica of a 1964 Fender vintage Stratocaster, it really looked like a pre-CBS Fender. The regular Strats still had that ugly large peghead that CBS had introduced in 1966, and at that time they all had black plastic parts. But this Tokai had the classic small head, a white pickguard with white knobs, staggered vintage style pick-ups, a separate tremolo block, the correct kind of pickguard screws, a light alder body, and even a decal that looked like the old Fender spaghetti logo see pictues below) – in short, it was exactly like those legendardy old Fender Strats at a time when Fender was still building those infamous 70ies style Strats that were so heavy that they got the nickname boat anchor.

No question that I had to play that guitar: it also sounded much more like a vintage Strat than the contemporary Strats. I had to have this guitar, which was priced at 825,- German Marks (the equivalent of 420,- € /US $ 540). I was fourteen, and that was a lot of money (especially after I got my first guitar only one and a half year before, a 2nd-hand Fender Strat from 1976), much more than I had. Fortunately this was about two weeks before Christmas, and I somehow got it managed that I got this guitar from all the money coming from different aunts, uncles and grandma’s.

I sold that guitar about six years later when I got a great old Fender Strat – something I regret today of course because meanwhile these guitars have a legendary reputation, and conesequently they are highly sought after, and prices went up (about 900 – 1,500 €). I have often noticed a certain trend for Japanese vintage Strats over the last few years, I guess this is because noone can afford vintage Fenders anymore, but those Japanese guitars from the 70ies or very early 80ies were not only – at least in the case of brands like Greco, Tokai, Fernandes, the Squier JV series – of excellent quality and sound great, in addition they are about 30 years old which means the wood dried and became extremely resonant, and they often have that authentic relic look. (If you want an advice what to do with your money: buy …)

Those Springy Sound Strats were available in different variations: first there were copies of the maple neck Strats from the 50ies, and of a 1964 Strat, both in many different colours. And – depending on the quality of the wood and the kind of laquer – there were models called ST50 to ST100. The number was also the price in Japanese Yen (the ST50 cost 50,000 Yen, the ST80 was 80,000 Yen)

By the way, soon after the release of these Tokai Strats, Fender won a lawsuit so Tokai had to change the design of the spaghetti logo decal. The series after the Springy Sound is also great but less sought-after than the ones from before.

I still have a rare vintage catalogue from those days, and the following pictures are all from this source. 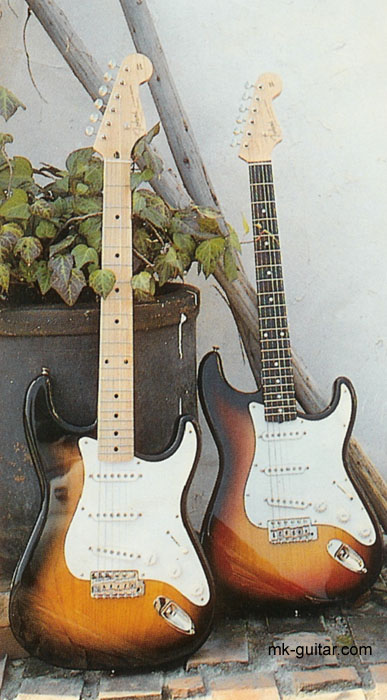