Some general info about Japanese vintage guitars from the early 80ies was subject in one of the last articles. This time I want to feature my fiesta red Squier Strat from the almost legendary JV series.

It was simply the overall quality of these guitars that left such a deep impact when they appeared on the scene in about 1982. These Squiers were copies of vintage Strats, to be precise, of a ’57 or ’62 Stratocaster. Other companies like Tokai or Greco had started to copy vintage Strat in detail at a really high quality shortly before, and the Squiers were Fender’s reaction to this trend: if we cannot stop the others, we can do the same ourselve, so the made a deal with the Fujigen Gakki company (who built Greco guitars). The very first guitars had a decal saying “Fender Stratocaster” with a small “Made in Japan” but this was soon changed to “Squier Stratocaster made by Squier”.

Generally, the term copy was redefined with these guitars because it is probably fair to say that their quality was better than of the normal American Fender Stratocaster of that time.

The featured guitar is from the second year of mass production, from the last months of the JV series. The name JV stands for Japanese vintage, it was the prefix of the serial number (this guitar is JV74356). 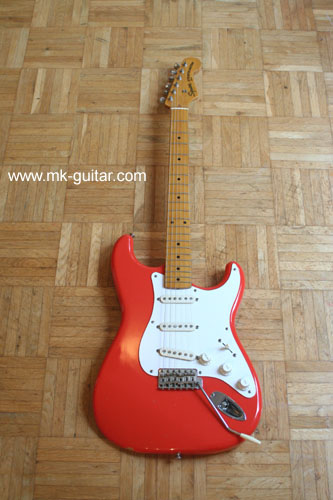 It is an export model which means it was built for mainly the European and American market. There were also domestic models for the Japanese market which were available in more different colours (candy apple red, california blue, or metallic pink) but these did not have US pick-ups like the export models. In fact the export guitars had the same pick-ups that Fender had introduced with their own vintage Stratocaster model that appeared about the same time.

This was a clever marketing idea because on the one hand it made people assume the sound quality was comparable to the much more expensive American guitars (which it was anyway), and on the other hand this was a logical explananation for this. I don’t think that the models with Japanese pick-ups sound noticably worse, but this way Fender had not to admit that their guitars did not really sound better than cheaper copies, they simply could argue this was because of their US pick-ups.

The beautiful light fiesta red (which does not really equal the original fiesta from the early 60ies, it has a tendency towards orange) was not available when the series was launched, it was introduced about 1983, together with black and white. Before there was only sunburst (2-tone for the ’57, 3-tone for the ’62).

This guitar is the ’57 model. The differences to the ’62 model are: one-piece maple neck (’62 has rosewood fingerboard) , white one-layer pickguard with 8 screws (’62: three-layers, 11 screws), no pocket shoulder in control cavity (this is for one of the additional screws of the ’62).

The body wood is probably  basswood (earlier models had ash elder). Basswood is not original Fender vintage style but has nevertheless good acoustic properties. The sound of this particular guitar is great, it has that slightly nasal twang but sounds very warm. It is very light but resonates well.

If you are interested in more detail info about these JV Squier guitars, the best source for it are the Squier JV Pages.

Mark Knopfler never owned one of these, however he played the same model as this one in a German TV show called Bananas in the 80ies when they filmed a clip of So Far Away.