After the portrait of the fiesta red 1983 Squier Stratocaster, today’s article features another Japanese vintage Squier, this time an ultra-rare model in all original pink metallic finish.

Since all important facts about that great JV series that was available in 1982-83 only have been mentioned in two previous articles (the mentioned portrait of the  fiesta red 1983 Squier Stratocaster, and the article about Japanese vintage guitars), I will not repeat these things and concentrate only on this particular guitar.

It is the only one in metallic pink I have seen, and before I did not even know that this colour was available. In fact the first Squier Strats were all sunburst, and in 1983 fiesta red, black, and white were added. These were all the colours those Squiers for the world-wide market (the export models) were produced in, but there were a few more for models for the domestic (the Japanese) market: California blue, candy-apple red (CAR), and pink metallic (which replaced CAR in late 1983). There are a few rather small differences between the domestic and the export models, with the most striking beeing the pick-ups which were not the US made Fender pick-ups but Japanese pick-ups called SQ-5 which are excellent and should not be considered as inferior.

The finish is thick glossy poly, just like on the export Squiers. Another difference however is the fretboard curve which is probably 9″ as compared to the 7.25″ of the export models or a Fender vintage Strat. I personally like that 9″ radius because it allows a lower action without string buzzing but still feels like a typical Strat. It seems most CAR Squiers had a shorter scale but this guitar has standard scale length. 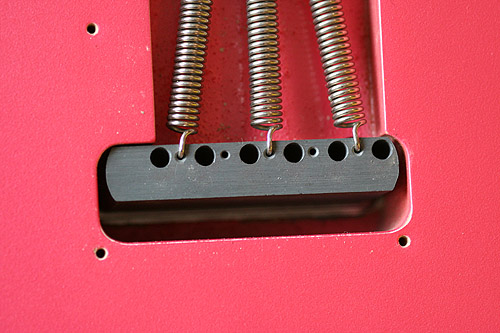