I have my National for some years now but never found the time, money, and courage to install a pick-up into this sensitive instrument. But a few weeks ago I decided to order what is said to be the best available pick-up for single cone Nationals: the iP-1X pick-up from Highlander – the same model that Mark Knopfler has in both his beautiful 1937 National and his new National.
I bought it new on ebay for USD 239 (169,- €), quite a lot of money for just a pick-up with an internal pre-amplifier, well, but a lot cheaper than the recommended retail price of USD 329.

What is always annoying here in Germany is that you have to pay not only customs (which in this case were only 2.7 %) but also 19% VAT, and this not only on the price of the item but also on the shipping costs (!?). You even have to pick-up the package from the local customs office.

In the box were the pick-up itself which is installed into a new biscuit (the piece of wood that holds the bridge) – so you have to exchange your old biscuit – the pre-amp which has to be installed in the interior of the guitar, a case for the external battery (replacing batteries inside of a National is no fun and puts stress on the cone construction), a guitar cable (stereo, one lead for the 9v battery power), and some velco tape to fix the cables inside the body of the guitar. 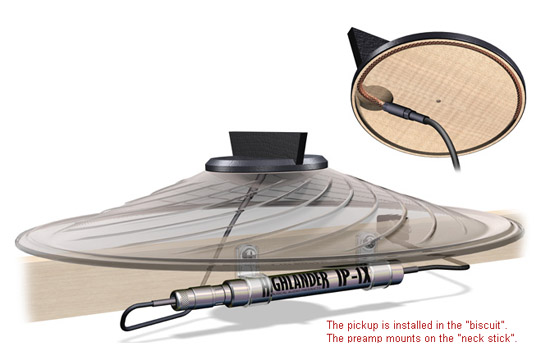 Unfortunately this is a job that is not easily done, and does not take just a few minutes. The new biscuit with its bridge is much higher than the original one and has no grooves. It took me almost three hours to transfer the shape and height of the original bridge to a cardboard template, then to transfer it from the template to the new bridge, to cut it out roughly with a fret saw, to fine tune the contours with a file, and to saw the new grooves, again using the template. Of course I did this extremely carefully and slowly because I was afraid to cause some irreversible damage. Fortunateley the new bridge soon looked fine and was ready to install.

Normally you would ask a good local luthier for this job, but (a) there was noone near who had experience with Nationals and this pick-up, and (b) I like to do all kind of jobs on my guitar myself anyway. An experienced repair man surely will get this job done much quicker than me.

One thing that worried me was the fact that you need to drill a small hole into the cone (!) for the cable from the pick-up to the pre-amp. Besides two tiny screw holes on the wood stick inside the body to hold the pre-amp, this is the only irreversible modification of your guitar. I was reluctant when I learned about this before I ordered the pick-up because the cone is extremely sensitive, and also in my opinion a major sound difference between a vintage instrument and a new National. The hole could be pierced with a small prick first, then carefully drilled to 2,5 mm (3/32 “).  After threading the pick-up cable through the hole, I had to solder the RCA connector to the cable that is plugged into the pre-amp.

The rest was easy: the pre-amp is held by 2 little screws, like Mark Knopfler I used the f-hole for the output jack (no drilling required), and fixed all internal cables with the velcro tape.

After restringing the instrument, I was extremely curious how it will sound. I went directly from the pre-amp into the mixing desk and played the guitar over my studio monitors. What should I say, the sound was …. wonderful, sounds as you hear it from Knopfler’s guitar on his live recordings. The output seems to be rather hot, and the pick-up delivers the full range from bass, middle, to treble end. It is so balanced that I even did not have to adjust any EQ, sounded fine as it was. After adding some reverb it was perfect. I also could not detect any sound difference with the acoustic sound. Even at high volume I did not get any feedback problems, great!

Now it was also time to add a strap button to the heel of the neck so that I could play the guitar when standing, something I did not need before. I did not produce any sound clips because it really sounds just like the recent Knopfler live recordings (he had different pick-ups installed in the past I think), listen to Romeo & Juliet on the roadrunning live CD for example.

I would give 5 stars for this product.