The US leg of Mark Knopfler’s 2010 Get Lucky tour is over, and we in Europe are looking forward to the next part. Due to the new recording policy on all MK concerts,  there seem to be less videos on youtube than we had the years before, but still we have some 🙂 On the base of mainly these videos I put together a list of the guitars Mark has used on the different songs on this tour so far:

Of course he played his signature model, and probably more than just one. He played it on:

The guitar on Border Reiver is tuned to Eb (one half tone lower than standard tuning). On the 2008 tour he played one Strat with 010 strings on What it is and Sailing to Philadelphia, and another one (owned by Glenn Worf) with 009s on Sultans of Swing and Romeo & Juliet, might be similiar on this tour.

I first listed So far away for the MK Signature Strat, because of this video (bad quality, red or sunburst Strat?) but on all other ones I have seen so far it it the sunburst ’54 Strat.

A rather new addition to Mark Knopfler’s collection.

Piper to the End 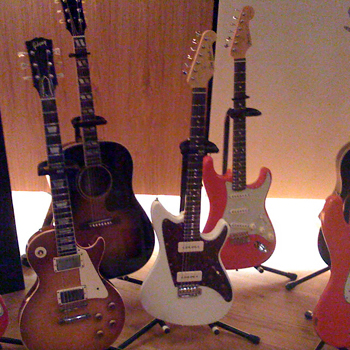 I cannot tell which guitars he played on the following songs. If you have been to the US tour or know more from other sources, please use the comment function to let us know.