The deluxe box set of Mark’s new Tracker album features a short film by the Danish director Henrik Hansen. It is already available on Youtube:


I think it is a nice film which shows Mark at work, developing songs for the new record, and at leisure, walking his dogs. I am sure you will enjoy the film very much.

With this blog post, I want to discuss a few guitar details seen in this film – well, this is a guitar site 🙂 . At the beginning of the film we see Mark in a side house of his home at the English south coast,  sitting at a table with a beautiful look on the ocean (which in fact is just 20 meters away). He plays Basil on an acoustic guitar, his vintage Martin D18 (this should be the one pictured in this blog post). On the table we see stuff like a variety of bottlenecks – both brass and glass-, a guitar cable, two books about guitars (Gibson Electrics by A. R. Duchossoir, and the ‘bible’ about National resonator guitars by Bob Brozman), a Mac notebook, and more. I should be a good guess to say that it is here where Mark composes some of his songs.

At 0:37 we see the same place from outside the window. Here we can see the peghead of a Strat, it seems Mark does not only use acoustic guitars at home but also electrics. Apparently it is his white 1964 Strat, the one used on e.g. Sailing to Philadelphia (we can see it at 1:54 or around 2:49, played in the same room). I wondered if he has certain guitars which he always keeps at home, as it seems most of the electrics are located in the room over his British Grove studio in London, a nearly two hours drive away.

Well, we can see him playing the same guitar at British Grove studio, around 2:24. The song seems to be Lights of Taormina. (I say it seems as I have not heard the album yet, although the first download links have apparently appeared in the web – I ordered my copy of the box set so that I have something to look forward to in March 🙂 ). The condition of this vintage guitar is amazing! Note that Mark put strings with a wound g-string on it – it seems to be Mark’s favourite for slide now (he played Gator Blood with bottleneck on it on the last tour).

The next guitar that appears in the film is the 1958 Les Paul. Here is a picture that shows some setup details, like the height of the stop tailpiece, the pickups, or strings. Note that the stop tailpiece is very low.

Another interesting detail is the view on the software mixer, at 1:20. Mark’s electric guitar are the purple mixer rails. Here we see that they recorded the guitar to three parallel tracks, probably one for each microphone they used. The tracks are mixed together with  -4.0 dB, -9.8 dB, and -23.5 dB for the three tracks, all panned into the center. The label below says ‘mk-elecgtr_57’ for two of the tracks, and ‘mk-elecgtr_67’  for the one in the middle. My guess is that two were recorded with a Shure SM57, and one with a Neumann U67. 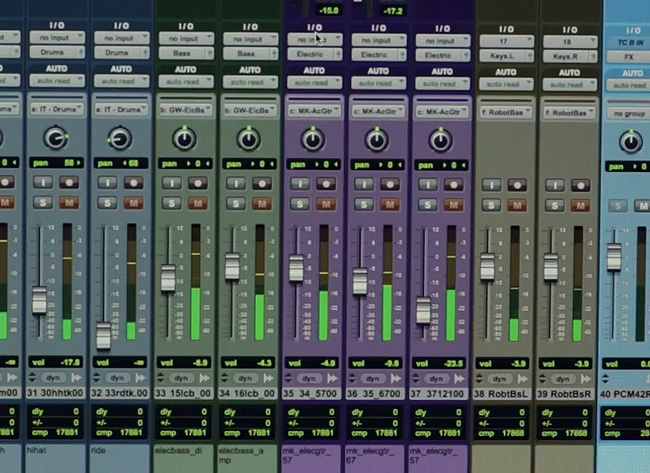