On April 18, 2015, some ‘historical’ Dire Straits recordings were officially released for the first time – four tracks from the ‘Honky Tonk Demos’, a demo tape the band recorded in July 1977. These were the first recordings of Dire Straits at all, five tracks recorded in a little London studio for a demo to help get a record deal. The four songs released now are Wild West End, Sultans of Swing, Down to the Waterline, and Water of Love. The fifth song from the original tape, a David Knopfler composition called Sacred Loving is not included unfortunately. 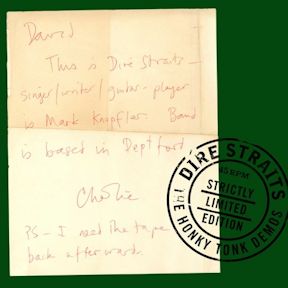 Only the Sultans of Swing version has been available before: it was released on a sampler called ‘The Honky Tonk Demos’ on vinyl, and later also on CD. The other songs were only available from two bootleg sources: one was a tape I got from a friend in the early 80ies, and the other was the silver CD bootleg ‘Early Demos’. The quality on both was rather bad, only mono, and a poor frequency response. The CD bootleg was even about 8% too fast and almost ‘unusable’ for this reason.

Some notes on guitar aspects

With this blog post I want to concentrate on some guitar aspects of these recordings, mainly on some details we can hear now for the first time.

Down to the Waterline: I already mentioned that both bootleg sources were only mono. What we did not know was that they were not both stereo channels to one mono channel but in fact only the left channel of the original stereo recording. In other words, all information of the right stereo channel was not included on the bootlegs, e.g. David’s rhythm guitar is mainly on the right channel and was hardly audible for this reason. David plays a 16th-rhythm similar to the later version from the first album but here without the phaser.

The lead guitar on the left channel should be Mark’s 1961 Strat(he got his other Strat later in 1977) which was not red yet but had a wood finish. This should be the bridge & middle pickup combination. Unlike on the first Dire Straits album, the whole demo features hardly any compression on the guitars so whe hear Mark’s guitar with a wide dynamic range.

The demo version features a third electric guitar that only comes in with some chords for the bridge solo part in the middle of the song. This is probably Mark on guitar, and it might be the neck pickup of his Strat.

Sultans of Swing: As this one ws available in even CD-quality, there is nothing new to discover here. The guitar is also the 1961 Strat with what sounds like the middle pickup. Unless Mark dialed in a very bright amp setting, it does not sound like the hot 13k DiMarzio FS-1 pickup that Mark had in the guitar later.

While it seems that Mark played all three electric guitars on the album version, the right rhythm guitar here should be David’s.

Water of Love: The bottleneck lead guitar is a National, just like on the first album. I guess it is not his famous Style-0 but his Tricone National from the late 1920ies.  This guitar is more on the right stereo channel and can be heard much better for this reason than on the bootleg sources. As the quality on the bootleg is very poor, I was not sure if it is a National or even an electric (as on stage) but now it is clear.

Just like on the album, Mark played a second guitar but now it is an electric instead of the acoustic on the official album version. David plays acoustic rhythm guitar.

On the inner sleeve of the double vinyl single we find one of the earliest Dire Straits pictures, from the gig at the Clapham Common bandstand on September 10, 1977. This plus some more pictures from the same gig have been released before but in much worse quality. We can definitely see the wood grain on Mark’s Strat body, which was not red yet.

David seems to play the ‘Water of Love’ Telecaster thinline. To me it looks (?) as if it still has the original finish here, with a white or pearloid pickguard (later the body holes were filled, and the body and also the pickguard (!) were painted black).