What do you think is the most important chord for the average guitar player? Well, presumably it is a rather simple, basic chord that is played often in all kind of tunes. So probably a ‘normal’ major chord, something like C or D.

Even a beginner quickly learns that there are many ways to play even something simple as a C chord. The first version you learn is probably the one that uses open strings, see the picture.

While this one is a favourite of all folk players, the most important version for rock is possibly the chord played at the 3rd fret position. In chord books you will find something like this:

This chord is normally played as barre chord which looks like one of these: 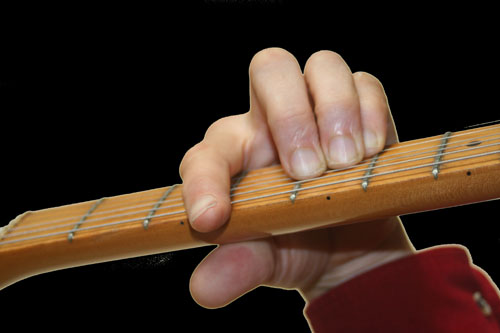 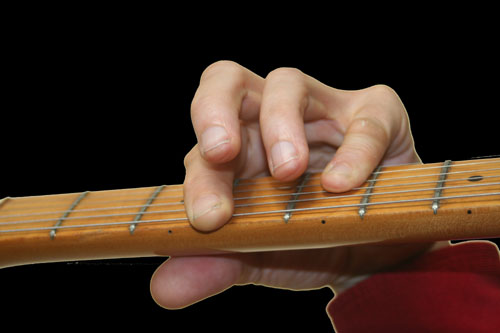 You will soon discover that for the Mark Knopfler playing style where you often switch from chords to fills or to a solo, the barre chords pictured above do not work very well because you  have to move your left wrist quite a lot This is because when playing lead Knopfler holds the neck “just like a plumber holds a hammer” (quote Mark Knopfler) while a classical guitar player holds the neck with the thumb at the backside of the neck /see pictures above), so the wrist is at a different position, much lower so that barre chords become easy.

The way to play a C chord in a “plumber’s way” would look like this as a diagram: 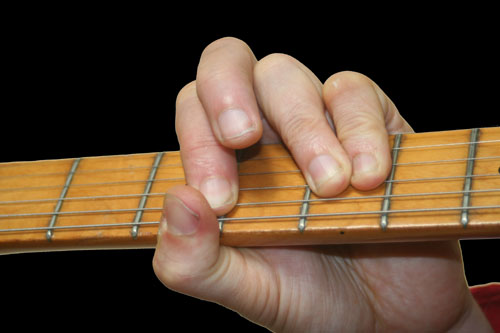 The index finger frets the a string, the pinky the d,g, and b strings, middle and ring finger do nothing, or (as in this picture) the ring finger might help to keep the strings down so that less force is required for the pinky. Compare it e.g. with the following picture showing Knopfler playing this C chord in ‘Money for Nothing’ (from the Live Aid concert, 1985): 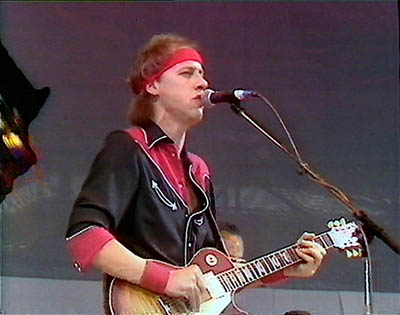 And why do you think a plumber holds a hammer the way he does? The answer is obvious: because he has to work with it and this is the way it works best. The same is true for the guitar: hold the neck like a plumber, this is the natural way to do it, forget about the snobbish attitude and about guitar teachers who still think barre chords are what makes “good technique”.

6 thoughts on “A plumber’s C chord”