Today the Orange Squeezer compressor by Dan Armstrong is an almost legendardy guitar effect. An essential portion of this fame is probably due to the fact that it is often named as an ingredient for the early Mark Knopfler / Dire Straits sound. Ironically this goes back to my old Dire Straits Guitar Page which was the first site in the web to mention the Orange Squeezer as part of the MK gear, so today it should be up to me again to clarify what is really sure and what is rumour.

What is sure, what is rumour?

First of all, there is no clear evidence that Mark Knopfler really used one of theses on any DS or MK album. The first hint however I got was from Andy Brauer’s column in I think Guitar Player magazine in the late 80ies where he claimed that Knopfler’s famous Stratocaster sounds were achieved with an Orange Squeezer and an Aphex Exciter. He didn’t give a source for this information, but I meanwhile know that he worked for Mark Knopfler when he was recording Randy Newman’s Land of Dream album (Andy runs a shop for amp repair and gear rental in the Los Angeles area, his article did not clearly state whether the Orange Squeezer was used on the Randy Newman session, or on the first Dire Straits albums, or is generally a part of Knopfler’s gear).

Source number two is the official tour program book of the Communique tour. It features an equipment list, and the last item in this list is the Orange Squeezer. However, this list was not specified for the tour or any particular album, it just said “Mark Knopfler plays…” Strangely Klaus Dewes, the author of a German book about Dire Straits published in 1980, also included the same equipment list in his book, but this time without the Orange Squeezer!

Thirdly, I once asked David Knopfler about it who mailed me that he believes they had one, but he didn’t remember for what or when it was ever used.

Conclusion: it seems likely that the Orange Squeezer was part of the gear, but noone knows any details.

Some facts about the Orange Squeezer

Anyway, so what exactly is the Orange Squeezer? Dan Armstrong developed a whole series of guitar effects in the 70ies. All of these were little coloured boxes with a plug to put it directly into the guitar output jack (after swapping two internal cables they could also be pluuged on the amp side, what makes more sense with a Strat because they don’t fit into the Strat’s recessed output jack). There was the Blue Clipper (fuzz), Green Ringer (an octaver), Yellow Humper (boost of certain frequencies), Red Ranger (booster, tone modifier), Purple Peaker (boost of certain frequencies), and of course the Orange Squeezer.

The official (yes, it is available again as a reproduction) product description of the Orange Squeezer says:

The Orange Squeezer compresses the dynamics of the music or of the individual notes without adversely affecting the attack of the note and without adding any significant noise or distortion to the signal. An internal adjustment lets the user adjust the output level to suit his instrument and his playing style, while the compression threshold is pre-set at the factory.

In other words: it is a simple compressor that works with a fixed compression setting, the user cannot control any parameters like compression ration, attack & release time etc. (for newbies: a compressor equalizes volume differences, your playing sounds smoother and remains at a constant volume, as a side effect, the sustain of a note becomes longer, for more information see this Wikipedia article) 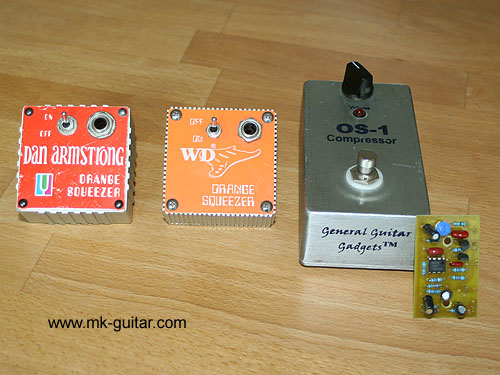 It is not really true that it does not add any distortion, not much, but there is a subtle distortion that adds warmth to the sound. Many players who tried it agreed that it sounds knoplflerish so this is another hint that it was indeed used (leaving out the question if the same players would have said the same if they hadn’t known that Knopfler used it !?)

The compression is rather subtle, it is difficult to get heavily compressed sounds with a Strat (which has a rather low output, the louder your guitar, the more compression you will automatically get). However, some early Dire Straits songs – such as Down to the Waterline, In the Gallery, or Lady Writer – feature guitar sounds with much compression. The only way I found to get this amount of compression from the Orange Squeezer is to use some booster before it in the signal chain. Of course it is still possible that Knopfler used one on these songs, and that more compression was added with outboard gear, which is from the mixing desk (and it is also possible that all compression was done alone during mixing).

There is another aspect to consider: compression – even a slight compression as from the orange Squeezer – can avoid a lot of distortion from the guitar amp. This is because louder signales – for example when you play two or three notes together instead of a single note – are compressed more, which means lower in volume. For this reason the amp distorts less on these notes. Have you ever noticed that many early Dire Straits guitar sounds are not that ultra-clean as most people think? In fact there is often a good deal of subtle distortion, e.g. on Down to the Waterline, Southbound Again, but also on Sultans of Swing. But what happens when you try to adjust your amp to such an amount of distortion – without using a compressor? Well, when it sounds right for single notes, it automatically distorts too much when playing more than one string, you will loose that clean sound. With compression it is different, you can adjust the amp to a warm subtle distortion, but the sound remains rather clean and Knopfler like no matter what you play. Try it out! This behaviour can be considered as another hint that in fact a compressor was used before the amp, which means as a guitar effect instead of outboard gear during mixing.

Different clones compared to the original

An original Orange Squeezer from the 70ies is hard to get, and prices went up during the last decades (I am sure partly thanks to me). In the 90ies a company called WD offered a first OS clone which I bought and still have. Unfortunately they did not copy the circuit with 100% accuracy, so their copy sounds somewhat different (brighter, but still great because it has a warm sound with that nice little punch that any compressor adds). Later there was a flood of companies who copied it (the original circuit is really simple, even a good start for any DIY newby). I also got one from General Guitar Gadgets later but for some reason I don’t like this one that much. It doesn’t sound that “open” to me, hard to explain in words. A few years later I managed to get an original vintage Orange Squeezer on ebay, and in fact this one sounds the best. The GGG clone was built into a floor stomp box by the way and had the volume control on the outside, which was very handy. I built the original circuit into this box and this combination is what I still use a lot.

Finally, a sound clip can say more than a thousand words, so listen to the following sound clip to hear the Squeezer in action. I demonstrate the aspects explained in this article, the last few minutes is me jamming on some Mark Knopfler tunes.

41 thoughts on “The Dan Armstrong Orange Squeezer compressor – Did Mark Knopfler really use it?”