This week I had a nice guitar here – a Gibson Chet Atkins CEC. The CE stands for classical electric, in other words a solid-body guitar with nylon strings and a piezo pickup, while the last C stands for conventional neck width (2″/5.1 cm  at the nut, a CE model with a neck width of 1.825″ / 4.6 cm was also available). 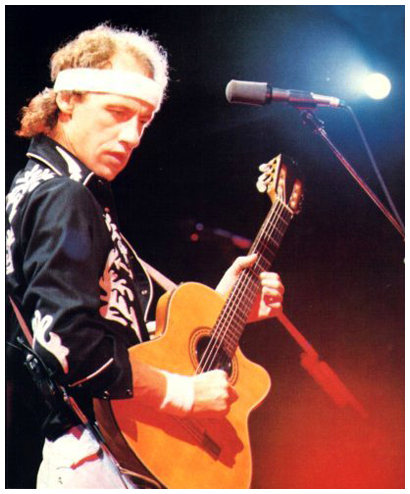 This guitar model was developed by Chet Atkins who approached Gibson with his prototype. The model appeared in Gibson’s catalogue in 1982, right at the time when Dire Straits recorded the Love over Gold album. This album features two songs – Private Investigations and the title track – on which a classical (=nylon-strung) guitar was used. Note that on the album it was NOT the Gibson Chet Atkins, however, Mark  Knopfler started to play it on stage for the Love over gold tour, right after recording the album. You can hear it e.g. on the Alchemy live album where it was used not only on Private Investigations and Love over Gold but also in the outro of Romeo&Juliet. Knopfler (probably) also used it on many sessions with other artists in the early 80ies,  e.g. with Phil Everly or Paul Brady.

The body is not all solid mahogany but features sound chambers to reduce weight and to make the sound more acoustic. The top is solid spruce or cedar. The neck is mahogany with a neck joint location at the 12th fret – like a classical guitar. The scale is 25 1/2″, the fingerboard and the bridge are from ebony.

The pickup system consists of six individual piezos that are installed under the bridge. The pickup signal is preamplified in the control cavity (that consequently houses a 9V battery), a volume control and the (active) tone control is located on the rim of the guitar (later models have a bass and treble control). A really useful feature are six trim pots inside the control cavity that allow to adjust the volume for each string individually so that you can equalize volume differences easily.

The guitar here i a CEC with the wider nut, I suspect – it is not easy to see on pictures – that Mark Knopfler had the CE model with the more narrow neck. For me the wide neck is nothing I am used to, nevertheless the guitar is not really difficult to play.

The Gibson Chet Atkins produces a faithful classical guitar sound, and can be played even at high volume without the risk of feedback. Of course a ‘real’ classical guitar might produce the typical sound even better – for this reason Mark Knopfler probably replaced the Gibson with a Ramirez on the On Every Street tour in 1991/2.

One problem of many classical guitars – and also of the example shown here – is intonation. As the bridge does not have individually adjustable saddles like on an elctric guitar, and neither  a ‘compensated’ bridge design with different lenths for the different strings, the guitar never perfectly intonates all notes. If you tune the open strings, the bass note on e.g. the low e string is out of tune at the higher frets, and there is almost nothing you can do against it.

Here is a video I recorded with this guitar (if video jumps make sure slide show above is not running):