This week Privateering was released, Mark’s new double-CD album. As there will be a lot of reviews anyway, I will focus on some particular aspects like guitars, sounds, songwriting techniques etc in my review. Likewise, I will not discuss anything related to lyrics. I will tell you what I love but also what I personally would have liked to be different. The album is still very fresh for me after listening to it for only a few days so I might see some things a bit different after some more time of listening. 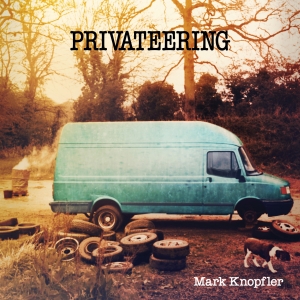 The album consists of 20 songs, 10 on each of the two CDs.  Mark always wrote a lot of songs for his albums, even the  Love over Gold album (1982) was initially considered for a double CD. It seems that he writes more and more these days so his first double-CD had been overdue for some time. Like with all his last albums, Mark focused on his musical roots so that we find a blend of Irish / Celtic melodies, rock, jazz, folk, and blues again. However, it is namely the blues that is much more dominant on Privateering than on any other MK album before. I think I heard Mark saying that one day he will record a blues album for the first time back in the 90ies –  Privateering is not just blues but maybe the outcome of what has been in the cards for some time.

This one has been played on the radio for some weeks, it is not the single (there is none yet) but was called the ‘focus song’ for the radio (although I don’t see it as the most typical of the album). A strummed acoustic guitar leads you through the song, the chords and chord changes are typical MK  (Dm, C,  Bb, F…  a la Sultans of Swing, or the change from D to Dm a la Six Blade Knife or Telegraph Road). And we have time-signature changes all over the song, mainly half bars, as in countless other MK songs (in fact I consider these time changes as THE typical element in his songwriting).

The middle section of the song consists of something I am sure many of us love to hear: a long solo on a clean Strat – I heard it was a MK signature Strat – not played with a pick like Mark often did to get the Hank Marvin sound in the past but fingerpicked).

I love the melody of the verses, the chorus is catchy, too, but somehow “too much” for my taste. Also I wonder how the song would sound if the other instruments – mainly the drums – were not mixed so low?

All in all a great song.

Here Mark opens the “Irish folk tunes” drawer. He has always used ingredients from here but I think the first time we heard him singing such a tune was Lily of the West with the Chieftains, or All the Roadrunning a bit later. This song is really beautiful, it has a strong melody, and the blend of violin, accordion, and whistle sounds nice. Nothing to dislike here.

Here the blues comes for the first time. It is closer to tradtional Muddy Water blues than anything we heard from Mark before (although You can’t beat the House  from the last albums was already a hint in this direction). We have the blues piano, slide guitar (the Danelectro?), a shuffle rhythm, and … the harp (played by Kim Wilson of the Fabulous Thunderbirds).

Luckily it is not the standard 12-bar chord progression but something on its own, again including time changes. If you like the song or not has probably to do with if you like blues or not. I was surprised a bit when I heard the song for the first time but got used to it and like it. I think it is fair to say that it proves that Mark can play authentic blues (in case anyone doubted it).

The title song is one of the strongest songs of the album. The mix of vocals and guitar lines with a unique melody and lots of fancy rhythm is really cool, and it catches you (I notice it plays a lot in my head these days). Major parts of the song rely mainly on vocals and acoustic guitar, the drums did not come in before more than two minutes in the song. Unfortunately they are restricted mainly to the instrumental ‘chorus’ part of the song, I can imagine some nice groovy stuff over the verses as well.

Another side of the blues, going back even more in musical history. This song would have fit on the Notting Hillbillies album perfectly. The slide solos are beautiful, so is the acoustic guitar intro. A nice little song for me (the melody is based on a traditional by the way).

Here the rocker of the album comes. Throaty guitar riffs (wah boosted?) and melodic slide licks over a straight rock rhythm. Not bad, nevertheless this one is not my cup of tea yet. It reminds me a bit of Gravy Train (which I like but don’t see as Mark’s strongest song either). I guess many will disagree with me on this one which means this song has its right to be there as well…

This one is one of my favourites of the album at the moment. Especially the melody of the verses is wonderful. Also the way the chorus resolves into the guitar solo. The chorus itself seems a bit weaker to me than the verse but it “destroys” nothing for me (as the chorus on Je suis desolé did for me) so I am happy with the song as it is.

Blues again, all I wrote about Don’t forget your hat is true for this one, too (the key – C – is also the same, however no time changes this time). Some nice guitar solos.

This song seems like a mix of Celtic sounds and instrumental parts with a rock song a la Silvertown Blues to me. It has a ‘spooky, foggy  mood’ and I  must admit I like it much.

A slow ballad with lots of hidden beauty. I love the first line of the chorus (“Seattle, you got to love the rain…”). There are some nice low guitar lines that sound like the ’54 Strat with  a pick with some pedal steel sound floating above in the outro, really nice.

Kingdom of Gold is another example of Mark’s approach to write folk songs. It would have fit on on the previous albums, but at the same time I hear that melancholy of e.g. Sands of Nevada in it. It is not one of my favourites of the album, but it might grow on me a bit more.

This is the third song of the album’s blues set. It starts with a cool guitar rhythm and has more of a rock song. The key is not too far away from the other two mentioned so far ( B now instead of C), and we have time changes again (a half bar before each vocal like).

Another slow song, with some nice melody lines. Not a bad song but very slow so you have to be in the right mood. I like the horn hook starting at e.g. 4:29. Did you hear the Down to the Waterline fog horn at 0:04?

Another one of the ‘blues session’, starting with a great Walk of Live riff (also in E), not too fast, not too slow. The vocal melody sounds ‘traditional’ but has something special that I like. There are various harp and guitar solos, this time not slide guitar but some ‘open strings’ stuff over E.

Still bluesy but more rock on Gator Blood.  The guitar lick is abit similar to the one on Do right to me, Baby from Slow Train Coming (I guess open G tuning with capo at the third fret). I can imagine that the breaks in the middle where Mark plays those slide quarter-note triplets on the high e string will blow us away when played at high volume live on stage (like the break in Calling Elvis). The rest of the song is really simple (which is not meant in a negative way), only few chord changes, a time change in the chorus, only a few instruments (which is something I must say I like as a contrast to the growing number of  instruments during the last years).

This song seems like a mix of Fade to Black and  the Argentinian tango approach of e.g. El Macho. It might grow on me a bit more but up to now I find myself skipping it often. I don’t like that harp-sounds-like-accordion solo in the middle but the guitar solo at the end is not bad, especially how it starts (click here for a tab and an analysis).

17 – Dream of the Drawned Submariner

A beautiful song again, just listen to the line “far away…… on the water”. The acoustic guitar is great that comes after the clarinet solo. And I like the synth string sound that creates a nice mood, with the Les Paul (?) licks between the clarinet at the end of the song.

Another side of the blues, more jazzy chord changes. Is it Paul Franklin on pedal steel guitar who plays those wah-wah chords occasionally? Lots of guitar solo stuff. Maybe it is because the song is towards the end of an album with 20 songs, I still am not sure what to think about this one.

Again a bluesy song, with harp solos, guitar riffs, blues piano, shuffle rhythm… . This time we have a true 12-bar chord progression for the solo sections. If you love blues and love MK, you should love this one.

The last song might be a skipper for some. It reminds me of a Ry Cooder song (still wondering which one, should be from the Boomer’s Story or Paradise and Lunch era). The instruments (e.g. the mandolin) also remind me of Cooder. Not one of  my favourites (not yet?).

After writing this review I notice that some of the words that appeard many times were “nice”, “blues”, “beautiful”, so maybe these sum up the album. With 20 songs at such an early stage some things might grow on me a bit more so it is too early for a final conclusion.

The strong emphasis on blues is  new, gone are folk waltzes (compare the number of songs in a 3/4 meter with the last two albums). I like that Mark avoids the traditional 12-bar blues scheme. And – no surprise – many songs are the continuation of what Mark did over the last let’s say two decades.

I think there is more cool stuff on Privateering than on the last two albums, this is something  I like because  the cool sound is what I  love so much about  the very early Dire Straits stuff.

One last word about something I do not like at all: I bought the limited super deluxe edition which is great with the additional DVD ( A Life in songs) , a  CD with three bonus songs, the vinyl LPs, and the artwork. However, it does not include the bonus CD of the normal deluxe edition (5 songs from rehearsals), and there is another bonus song (Your perfect song) if you buy the mp3 album at Amazon. I must admit it is not too important for me to have these as well, but if it was I had to buy the deluxe edition in addition (nice pun) to the super deluxe edition – and this is simply ridiculous. This might have to do more with a decision from the record company than from Mark but still it is a no-go I think (and there were similar complaints about the Get Lucky deluxe box before).

14 thoughts on “My Privateering review”