You probably know the discussion started by John Suhr about the originality of Mark Knopfler red Dire Straits Stratocaster (the one with the maple neck, not the 1961 Strat with the rosewood fingerboard). John Suhr worked on Mark’s guitars in the early 80ies and stated that this guitar was not an original vintage Fender but a ‘fake’, probably a Japanese copy.

I always used to be a bit uncertain what to think about this. John Suhr is of course a great guitar expert who makes wonderful guitars but this does not automatically imply to be an expert on vintage Fenders, especially not back then when information was generally harder to get than it is now, it was of course pre-internet era, and even books on this topic were rare or simply non existent yet. And mind that of course Mark’s guitar was – if it was a vintage Fender – not in an original state: new body finish, new neck finish, new fender decal, new fingerboard, new pickguard,…

In this blog post I will show you a part of the guitar which – to my knowledge – cannot be a copy: the tremolo bridge. 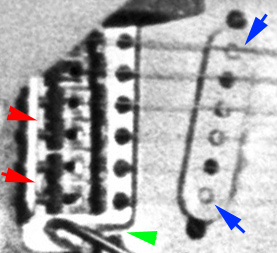 In the picture (from early 1978, Mark got the guitar in 1977) you can see a few details that in my opinion are not possible for any Japanese copy parts from the 70ies. Let’s start with the red arrows: here you can see a part of two of the three screws that hold the tremolo block to the bridge plate on any Fender vintage style tremolo. Well, this does not sound like any spectacular detail but I’d say most Japanese bridges were die-cast one-piece tremolos, similar to the Fender tremolos from the 70ies. All the ones by Tokai or Greco at least were.

There were a few two-piece constructions, I have one on a crappy Japanese copy myself. But on all of these that I found so far, the string spacing is different, almost three millimeters (1/8 “) less (52 mm compared to 55mm). If this was the case on Mark’s guitar, the strings would run differently (blue arrows) across the pole pieces of the bridge pickup (this is Mark’s original 1961 pickguard from his 1961 Stratocaster, with the original pickups). Also the base plates of the Japanese bridges are not as wide, due to the narrower string spacing. There would be a bigger gap between the bridge and the pickguard (green arrow).

These is enough reason for me to claim that this bridge is not a Japanese copy! Before you say, well, maybe it is a Chinese, Corean or European copy part… forget it, in the 70ies there were no copies from other Asian countries except Japan, and the few European copies of this time were not even close to a Fender bridge. They did not have the vintage-style bent string saddles etc. And what about American replacement parts? – Well, these were the 70ies, you could not buy any replacement parts except the ones by Schecter, and possibly Mighty Mite. These however were not close Fender copies but ‘improved designs’ with the more solid saddles, typically of brass, and hard to get in England about that time (Schecter’s first English distributor Chandler Guitars started in 1979).

I still might be wrong but I doubt it: show me a non-Fender bridge like this to prove me wrong!

5 thoughts on “Bridge on the Dire Straits Stratocaster: Japanese or Original?”