Recently I did a service job on a Suhr MK1. It is the same guitar in fact that I played on a youtube video and that was featured in a blog post six years ago. It belongs to a collector of MK-related guitars who lives near my place, and who kindly also lent me some of the more expensive guitars for my youtube videos in the past. 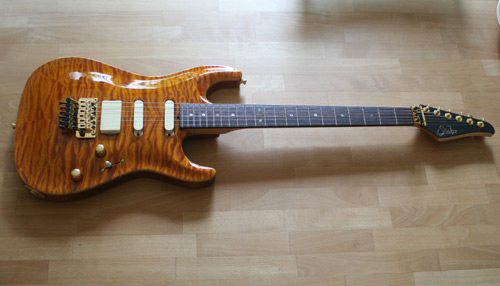 With this blog post I want to focus on the Floyd Rose tremolo on such guitars.  I must admit that I had never delved deep into Floyd Rose tremolos and their differences before, but with the arrival of this guitar I had a closer look at it.

One striking feature of an original Floyd Rose are the protruding screws on the rear side of the bridge that lock the string ends. I could not remember such long screws on the MK-1 so I had a closer look at some pictures of it again. There are some nice ones on the cover of the Mark Knopfler guitar style books, and here I did not not only find that Mark has shorter screws but I also found a ‘Schaller’ logo on his tremolo where mine says ‘Floyd Rose’. Does Mark’s guitar have a copy of the original tremolo?

Schaller tremolo on the original MK-1

Schaller is a German hardware manufacturer, well known for e.g. their tuning pegs. Some quick research told me that in fact Schaller was the manufacturer of the original Floyd Rose tremolos for a long time. So these were made in Germany for Floyd Rose.

In addition to the original Schaller-made FR tremolos various FR-licensed tremolos were available from several companies, and Schaller was one of these. In other words, they made the original tremolos for Floyd Rose, and they made a modified version featuring some improvements. These had a label ‘Licensed under Floyd-Rose patents’ on the bridge base plate, near the fine tuners.

Besides the length of the protruding locking screws, another difference was the material of the bridge base plate: on the original FR tremolos it was steel, while on the licensed tremolo it was die-cast. By the way, the steel plate is magnetic, the die-cast version is not! Where the bridge plate was attached to the bridge posts, the original FR tremolo has a knife edge. As die-cast metal is much softer than steel, the licensed tremolo had steel inserts here. The advantage: if the knife edge becomes worn, you can exchange these inserts. Also it had steel inserts that hold the screws to fasten the bridge saddles. If a thread of these is stripped, the screw will not hold the saddle anymore and the whole tremolo bridge becomes unusable. Steel is harder so that the threads will last much longer, and if one was stripped you can simply replace the insert with the thread.

Later this modified design became available from the Floyd Rose company as well. It is often referred to as the ‘Floyd Rose II’ tremolo. And there were different other companies who offered it – partly built in Germany by Schaller, partly in Asia. The latter are said to be inferior in quality.

Sound difference between the Floyd Rose and the Schaller?

There are some who say the die-cast Schaller version sounds a bit different than the original Floyd Rose tremolo with the steel bridge plate. It is said to be softer and warmer, and the steel version to sound brighter. This sound difference and the screw length were two reasons to make me me wonder if the Schaller-licensed tremolo might be the better choice for any MK-1-style guitar, be it a Suhr, a Pensa, or a Pensa Suhr. In fact some of the original Pensa Suhrs built by John Suhr at Rudy Pensa’s Music Stop in New York had the original Floyd Rose, including e.g. Mark’s black Pensa Suhr, and others like the MK-1, or the one that is displayed on the cover of the Neck & Neck album had the Schaller version.

Both parts are interchangeable between both tremolos (you need the Schaller plate for the shorter screws!), so  I exchanged both on my Suhr, and I made before/after sound samples to judge the tonal difference. Conclusion: I cannot hear any sound difference on the samples at all. I planned a youtube video to demonstrate the sound difference, but as I can’t hear a difference I did not.

I will leave the Schaller parts on the Suhr to make it look as close to Mark’s as possible, and keep the original parts in the case of the Suhr.