When browsing Adrian Boot’s Dire Straits photos, I found one from early 1980 that allowed a very rare view on Mark’s 1961 “Sultans” Stratocaster: a view on the back of the guitar. As the tremolo cover plate is missing on this  guitar – back then and still today – we can see the inside of the tremolo cavity. From some other pictures or video stills, I already got the vague impression that Mark had five tremolo springs, but here it is finally proven. Besides we can see how the tremolo claw (the part that holds the springs) is adjusted. As you know, the two screws that hold the claw in the body allow to adjust the tension of the springs. The ditance between the claw and the end of the tremolo cavity (red arrow) seems to be an estimated 12 – 13 mm (1/2 “). With this setting, the springs are hardly stretched. 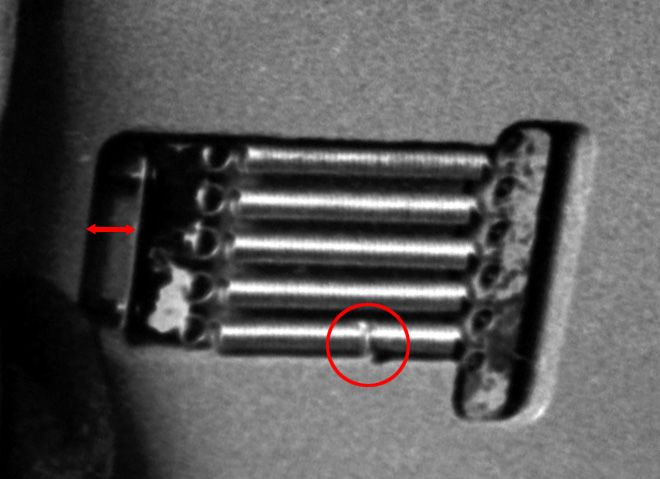 If I set up my guitar this way, even with 010 strings the five springs have enough pull to keep the tremolo base plate fixed to the body, in other words, no floating tremolo. This matches  the picture below that shows the tremolo on Mark’s guitar. (Too bad, if it was floating, we maybe even could have been able to estimate the string gauge from the tremolo angle, note that we have no reliable information on the string gauge in the 1977 – 79 period at all, anything from 08 – 010 is possible!!)

I am not sure what we see in the red circle. As this is near the place where the grounding cable  from the electronics cavity enters the tremolo cavity, my guess is that the cable is attached to the spring instead of to the claw. As Mark used to swap the complete loaded pickguard from one of his red Fenders to the others then (see also here), it was possibly easier and quicker to do it this way. It should be possible to pinch the wire between the spring coil, but it looks rather to be soldered (?).

We know that the guitar was refinished to red (around summer or autumn 1978, it was bare wood finish before). Here is another proof: all screw holes of the tremolo cover plate are filled from the paint job.

The tremolo block looks original (the scratchy look is typical for old Fender blocks, compare picture below). At least we can tell from this that the Sultans Strat does not have a brass replacement block (seems trivial but thanks to companies like Schecter or Mighty Mite brass replacements were a very common upgrade in the late 70ies). I am not convinced about the originality of the claw which looks a bit too rectangular while the original ones are rather trapezoid (compare to picture below) but this might simply be an illusion (this part normally does not get lost, and why should someone exchange it?).

And one more conclusion from the picture:  Mark possibly played Fender strings then (confirmed for the 1980/81 period), but these do not seem to be the Fender bullet strings that were common  then as well  (which do not have the typical ball end but a more solid “bullet” end instead). I guess we should be able to see those bullets on the picture if he had these.

9 thoughts on “Tremolo Setup of the Sultans Strat”