For your enjoyment, here are a few rare pictures of Dire Straits. They are from a concert in the Zirkus Krone building, Munchen, Germany, on May 29, 1979. After February 1979, they returned to Germany in May, still on the CommuniquÃ© tour.

The gear used on this part of the tour has changed slightly against February: Mark still played the #80470 maple-neck Strat (see also this article on his two red Fender Strats) and the black Fender Telecaster on Water of Love over the Morley Volume pedal, and the MXR analog delay, but now he played two of the Music Man HD 130 amps, David played a Peavey T-60 guitar, David’s black Strat was used by Mark for Setting me up now, John played two Ampeg SVT amps.

While watching these pictures in the slide show, you might want to listen to a sound clip from this concert (date and venue are probably this concert, it is sometimes denoted as Frankfurt, Loreley, June 23, 1979, which is most likely wrong). As this recording runs at a wrong speed (many shows that were recorded on cassette recorders in those days are +/- 5% wrong speed), I corrected the speed. 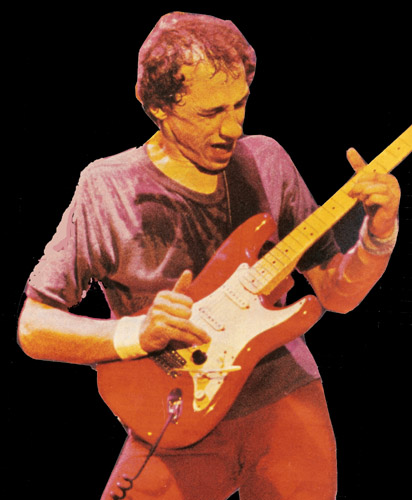